Here is a case, you are probably all familiar with:

The police arrive with a patient that was “out of control”. He is known to take illicit substances. He went home earlier today, where he lives with his mother and ‘punched her in the face’, before running off. Police were called and he was later found naked, running down a city street, damaging shop storefronts. He was violent and uncontrollable and was tasered three times, by police. He is currently on an ambulance stretcher held down by 4 police officers. The ambulance have given him 10mg of midazolam IM. He is screaming obscenities and as you approach and try and engage with him, he doesnt even register that you are there. He is naked and perspiring profusely. No-one has been able to take a set of vital signs on the patient.

At the last EMCORE conference,  Dr Zeff Koutsogiannis, Emergency Physician and Toxicologist, spoke about the new and novel stimulants that are out there. There are hundreds, so many, that’s even the toxicologists have difficulty keeping up with them.

You may have heard of some of them, the New Psychoactive Substances: Flakka, Gravel, NBoMe, Molly, Bath Salts, Bubbles, Ivory wave, Energy 1, Mephedrome or Mieow Meow or MCAT and more. One of the reasons why there are so many, is that the chemical formulas are simple variations of each other.

These drugs variably act on one of three receptors:
Dopamine – causes the euphoria
Noradrenaline – stimulant that makes you feel superhuman
Serotonin – the hallucinogenic component
Depending on the degree each receptor is stimulated by the drug makeup, the recipient will have a different reaction.

Agitation, paranoia and hallucinations are the usual reason for patient presentation. These patients need simple benzodiazepines to calm them.
There may be an incidental finding of fever. Beware the febrile patient, high fevers(>41C) can result in organ damage- Benzodiazepines help calm and thus cool the patient down. Some of these patients may require intubation.
Patients can complain of palpitations and sinus tachycardia as well as arrhythmias such as ventricular tachycardia and fibrillation.
Patients can present with seizures secondary to the substances they’ve taken. Usually if they recover quickly, nothing more is needed, if they do not , then there is a risk of intracranial haemorrhage, so a CT scan is needed. Benzodiazepines are the treatment for seizures.
Check Sodium as some of these patients get an SIADH syndrome, or they have been excessively perspiring and drinking only water and are hyponatraemic.
Vascular complications: AMI and stroke can occur . Beware when these patients start to complain of chest pain, myocardial infarction is well documented in this group.  Also beware those complaining of headache. The effects of the medication can sometimes result in intracranial bleeds. The resultant hypertension that often occurs can cause cerebral vasospasm. 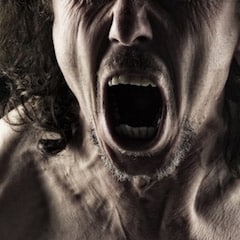 The case above is one of excited delirium, also called excited delirium syndrome. This is a triad of Delirium + Psychomotor Agitation + Physiological Excitation and is a medical emergency. This patient group is often referred to as ‘crazy then dead’. They can be agitated, paranoid, violent, ranting, hyperactive, hyperthermic and perspiring and show great feats of strength. They can then arrest.

The cause is some type of stimulant and known to occur in those taking cocaine, methamphetamines, and LSD. Also a significant number of these patients will have a previous psychiatric history. At autopsy a cause of death is usually not found.  These patients need to be sedated urgently. They may even need to be intubated.

The mainstay of treatment is:

The aim is to keep them calm and awake, or asleep, but easily rousable.

Think about the patients as falling into 3 groups:

Group I: Patients that are mildly agitated, but still engage

Group II: Patients that are distressed and becoming more vocal and hostile