A 90-year-old gentleman presents via ambulance to the ED. He has suffered a presyncopal episode whilst out at the RSL. He was described as pale and confused before slumping to the floor. He made a reasonably rapid and complete recovery by the time the ambulance personnel arrived.

He denied any intercurrent illnesses, chest pain or breathlessness and was rather embarrassed by the fuss being made.

The paramedics noted that he had a slow pulse at 45 and it was irregular.

His examination was otherwise unremarkable.

In the background he had a history of “an irregular pulse”, sees his GP every 6 months for a check up but otherwise avoids hospitals.

On arrival he was symptom free.

His initial ECG is shown below:

THEN- someone mentioned that he had a note in his record from 2015 mentioning type II heart block.

How can we clarify whether we have some hidden P waves?

The first step was just to increase the limb and chest lead amplitudes to 20mm/Mv. No p- waves appeared.

I had just been reading Pete’s blog on the Lewis lead that morning and pondered whether there was any role for the Lewis lead in the clarification of the diagnosis of AF.

As those who have attended EMCore in the past may have noted, I have an interest who the who, why and when of these medical discoveries and had done some reading around the Lewis Lead.

The technique was described by Sir Thomas Lewis (1881 to 1945) in his book Clinical Electrocardiography. Sir Lewis developed the lead configuration with the purpose to magnify atrial oscillations present during atrial fibrillation, which he referred to as auricular fibrillation.

It seems that the original use of the lead was about to be revisited!

As an aside it seems Sir Thomas Lewis and I have much in common, both born and raised in Wales, both trained at University College London and, if the photo below is anything to go by, share a very serious attitude and severe demeanour. 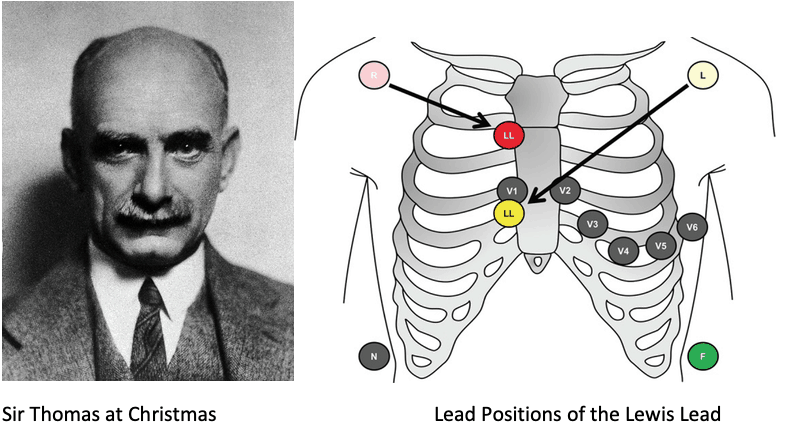 We reset the monitoring leads to the positions described and the Lead I tracing is shown .

The lead I tracing shown clearly demonstrates atrial activity with P-wave dissociated from the QRS complexes.

The diagnosis of complete heart block was reached.

This just raises the question of how many other “slow AF” diagnoses that I have made are complete heart block. I for one will be making greater use of the Lewis Lead in the future. 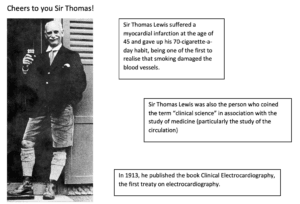