Should we bring Bretylium back in cardiac arrest?

Following a brief presentation at EMCore Hong Kong in April of this year, that challenged our thinking, I have asked our expert colleague, Dr Will Davies, to expand on an argument he put forward, (in our clinical topics series), that we should revisit the use of bretylium tosylate in cardiopulmonary resuscitation, especially in the treatment of VF/VT cardiac arrest and make it a first line agent.

What does Bretylium do?

Bretylium tosylate is a bromobenzyl bromide quaternary ammonium compound. It has a complex pharmacology.

Bretylium is classified as a class III Singh-Vaughan Williams agent. These agents act on the potassium channels of the myocyte and prolong the action potential duration and refractory period, this, combined with the maintenance of normal conduction velocity, prevent re-entrant arrhythmias.

Theoretically this combined activity would be very desirable for patients experiencing VF or re-entrant VT. The suppression of noradrenaline at cardiac nerve endings leads to a coronary vasodilation, improving cardiovascular response, especially myocardial perfusion and increasing the likelihood of survival of intact myocytes. (3)

At the EMCore conferences we have long argued that 1mg adrenaline may be too high a dose as excessive adrenergic stimulation of the myocardium is likely to lead to coronary vasospasm, increased metabolic demand in a substrate deplete environment and increased resistance to flow with deleterious effects on cardiovascular resuscitation. We have argued that adrenaline doses titrated to invasively monitored diastolic pressures appropriate for maintenance of coronary perfusion, may be more appropriate. Bretylium would fit with such a narrative.

Direct chemical defibrillation is a phenomenon only ever recorded with use of bretylium and has been demonstrated in both the experimental model (unfortunate dogs with ligated left coronary arteries and VF), and clinical case series of humans undergoing cardiac surgery or with MI with recurrent VT/VF. (4,5). There is also evidence to suggest treatment with intravenous bretylium decreases the defibrillation energy requirement for DC cardioversion and increases likelihood of successful shock.

An editorial in the International Journal of Cardiology in 1983 (6) argued that the clinical use of bretylium is resuscitation had been hampered by its use as a third line agent for treatment of resistant VF/VT after the use of lignocaine and procainamide. The author (who also seems to be responsible for much of the other work of bretylium in VF) argues that pretreatment with class 1a or 1b agents would theoretically decrease the efficacy of bretylium as a third line agent and would result in an under reporting of efficacy. Despite this the editorial tabulates 14 case series of significant improvement in outcomes in resistant VF.

You will also note that all the references come from a time before the internet when collars were large and hair was long! Perhaps this is a photo of someone who may have been principle investigator on one of these papers (or maybe not).

So Why don’t we use Bretylium any more?

At the core of the decline, are a series of arguments.

Let’s look at these in a random order, leaving the juiciest to last!

3. Orthostatic hypotension is not a problem if the patient has no output (as in VF) and if one does achieve ROSC it is unlikely that the patient will be standing up any time soon, despite what Baywatch tells us!

4. As above- bradycardia with output, is a step or two up from VF!

1. Most cases of chemical defibrillation occurred much quicker than that and the drug’s early autonomic activity may be responsible for its acute anti-fibrillatory effects, whereas its later direct class III effects lead to lengthening of the action potential and the effective refractory period in myocardial and Purkinje cells but not in the atria. (2)

2. The re-emergence of amiodarone in the mid 1990s led to a decrease in the use of bretylium and eventually the abandonment of the first line class I agents in VF/VT. Cowley et al demonstrated equivalence of high does amiodarone to bretylium with significantly less second phase hypotension which led to the adoption of amiodarone as the “class III” agent of choice. (7). A subsequent metaanalysis demonstrated no stastistically significant improvement in ROSC over placebo in several trials of bretylium. Let’s look at that, but first a diversion via Nature Journal March 2019. (8)

Is the statistical interpretation wrong?

The authors state “we should never conclude there is ‘no difference’ or ‘no association’ just because a P value is larger than a threshold such as 0.05 or, equivalently, because a confidence interval includes zero.” It just means that the statistics haven’t achieved a greater than 95% confidence that the association (or difference) is not due to chance. It also assumes a normal distribution of variables.

The authors compare two trials; looking at onset of AF following use of NSAIDs. The researchers describing their statistically non-significant results found a risk ratio of 1.2 (that is, a 20% greater risk in exposed patients relative to unexposed ones). They also found a 95% confidence interval that spanned everything from a trifling risk decrease of 3% to a considerable riskincrease of 48%. The researchers from the earlier, statistically significant, study found the exact same risk ratio of 1.2. That study was simply more precise, with an interval spanning from 9% to 33% greater risk.

The authors of the Nature paper concluded “It is ludicrous to conclude that the statistically non-significant results showed “no association”, when the interval estimate included serious risk increases; it is equally absurd to claim these results were in contrast with the earlier results showing an identical observed effect.

When the data was tabulated it looked like this: 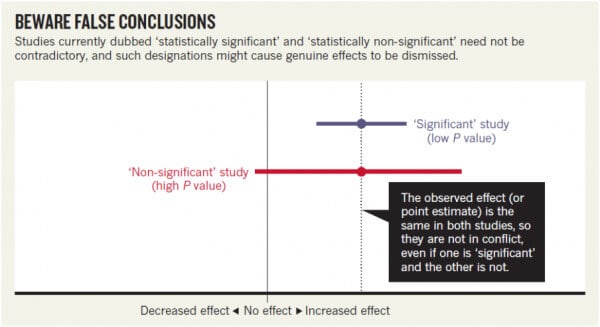 The median likelihood ratio is the same, just the confidence intervals differ and in reality the effect is probably the same.

Data on survival to admission in out of hospital cardiac arrest

Median LR is around 1.4, not significant (for what it’s worth)

How about survival to discharge?

Now these are artificial comparisons of small number metaanalysis data, but the trend does appear the correlate with the theoretical benefits of bretylium in cardiac arrest.

It may be time to look at revisiting bretylium as a first line agent in VF cardiac arrest using a novel lower dose catecholamine protocol targeting a diastolic of 20-30mmHg with invasive monitoring to ensure a myocardium that is well perfused, stable and amenable to defibrillation.