A potential complication of a failing pacemaker, is a condition known as ‘Runaway Pacemaker’. Below are two cases from the literature, that demonstrate a runaway pacemaker causing a potentially lethal ventricular arrhythmia.

Whenever we look at an ECG, we always look for the pacing spikes. These may not be visible, especially if the patient’s rate is above that set for the pacemaker. The spikes may sometimes be visible and sometimes not and in these situations we need to work out if the pacemaker is being inhibited, or if it is faulty.

An elderly gentleman presents with several days of fluttering in his chest and chest pain. He has a past medical history of complete heart block for which he has had a pacemaker inserted. His ECG is shown below. What does it show? 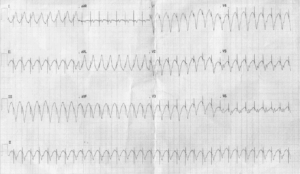 This ECG shows ventricular pacing at a rate of at least 150 beats per minute. The arrhythmia did not respond to metoprolol and amiodarone, but was terminated with application of a magnet and the pacemaker replaced. On pacemaker interrogation, the rate had been 189bpm.

This is an example of a ‘runaway pacemaker’.

An elderly patient presents following several pre syncopal episodes. He has a history of complete heart block for which he has a pacemaker. His ECG is shown below. 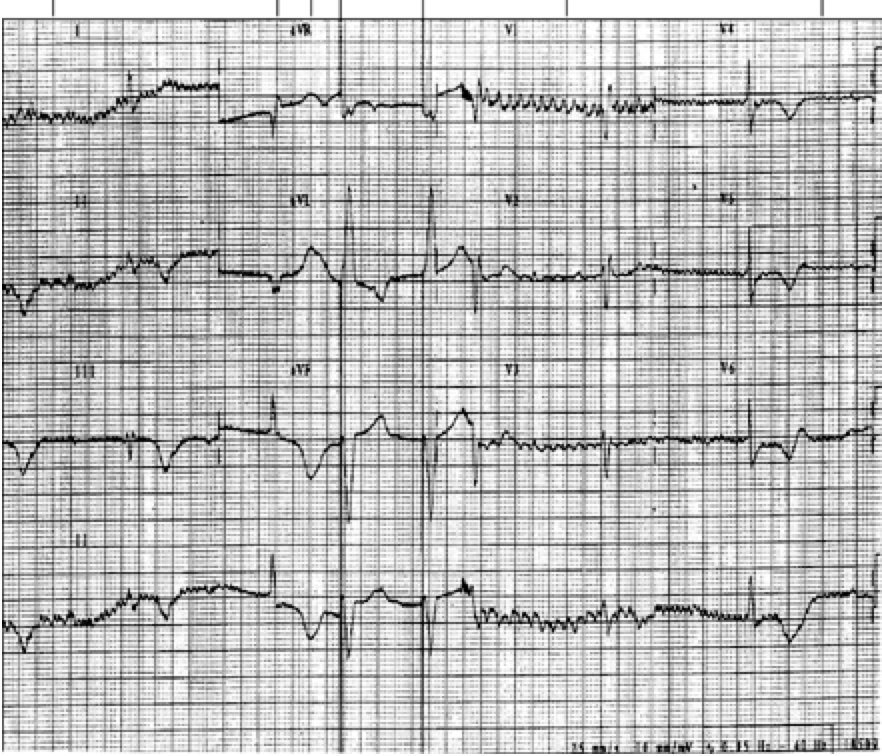 The ECG shows pacemaker spikes with no ventricular capture and an escape rhythm of about 40bpm. 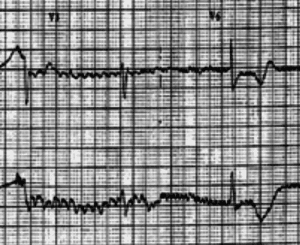 There are low amplitude pacemaker spikes at a very high rate, that fail to capture.

These impulses did not change following application of a magnet.

This is another example of a ‘runaway pacemaker’.

It is a malfunction of the pacemaker generator, mostly due to battery failure or external damage.

The very rapid rate doesn’t capture, most likely due to

Although new age pacemakers and defibrillators have built in safety measures, this rare phenomenon can still occur.

Fixing the problem may not be straightforward. Application of a magnet may not disengage the pacemaker, or slow the rate, but should be tried. If all else fails, the pacemaker leads may need to be cut. Following this, and depending on the underlying rhythm, the patient may then need to be paced.