HOT OFF THE PRESS: A new clinical trial showing that rapid IV fluid administration does not affect neurological outcome in children with DKA, as has previously been thought.

This was a randomised controlled trial in 13 centres. 1255 children were enrolled with 1361 episodes of DKA, which was defined as:

Most of the evidence we have thus far is retrospective and implies that a rapid infusion of fluids decreases serum osmolality, resulting in brain swelling. Slow rehydration has been advocated. This study challenges that and shows that other mechanisms are at play.

This was a deterioration in GCS < 14: measured as two consecutive scores of GCS<14 in the first 24 hours.

These were memory impairment and apparent brain injury resulting in hyperosmolar treatment or intubation. 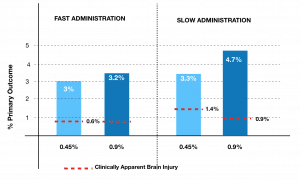 The above graph shows that patients with slow administration of fluids had an increased frequency of ‘primary outcome’ (GCS<14) ie., they did worst. Those patients with rapid IV fluid administration had a lower rate of clinically apparent brain injury. These are trends however, as there was no statistically significant difference between the two groups.

An interesting paper with some minor limitations, that however challenges the notion that rapid infusion of fluids leads to worst outcomes.

This may be a practice changer. Will this change your practice?

It probably won’t change mine at the moment, nor quite a few people that have responded, to this blog, but a gutsy study. If the child needs fluid resuscitation, give it to them, (5-10mL/kg and repeat if have to). If they don’t, go slow. The previous evidence has shown significant issues with volumes of over 40mL/kg. I’m not sure that such volumes are needed.

You may also want to read 2 other blogs written on the topic: