Massive propranolol overdose is perhaps one of the most challenging overdoses to manage. In 2009 we posted a case we had. We have progressed in our management since then.

A 26 yo woman is brought to the ED by ambulance. She has been found by her mother in her bedroom in a confused state. She had been seen 45 minutes earlier and had been well. The ambulance report that there are 60 x 40mg tablets of Propranolol that are missing.

On arrival the ambulance officers state that the patients GCS was 13 and blood glucose was 5.5. The ambulance have established intravenous access, but given nothing.

On arrival the patients vitals are as follows:

What can we say so far?

Haemodynamically the patient is holder her own. Why are her sats only 98% on 6L of oxygen and her respiratory rate is high? Has she aspirated?

What should we be thinking about interns of the drug taken, the amount taken and the time it was taken?

Propranolol is considered one of the most toxic, non-cardiac selective beta blockers available. It can affect beta 1 and beta 2 receptors causing bradycardia and hypotension. It also has membrane stabilising ability blocking myocyte Na channels and can therefore prolong QRS duration and affect cardiac conduction.

It has high lipid solubility allowing it to rapidly enter the central nervous system and its high protein binding make it difficult to dialyse. It is hepatically metabolised and excreted in the urine.

It’s absorption is rapid with many signs developing within 30 minutes and most signs usually present within 60 minutes. All patients have symptoms within 6 hours.

A dose greater than 1g is considered potentially lethal.

What are some of the signs and symptoms you might expect to see?

In propranolol overdoses we have to deal with the beta blocker effects and the Na channel blocking effects.

The Nurse hands you this ECG. What findings in this ECG may reflect the overdose and are they predictive in any way? 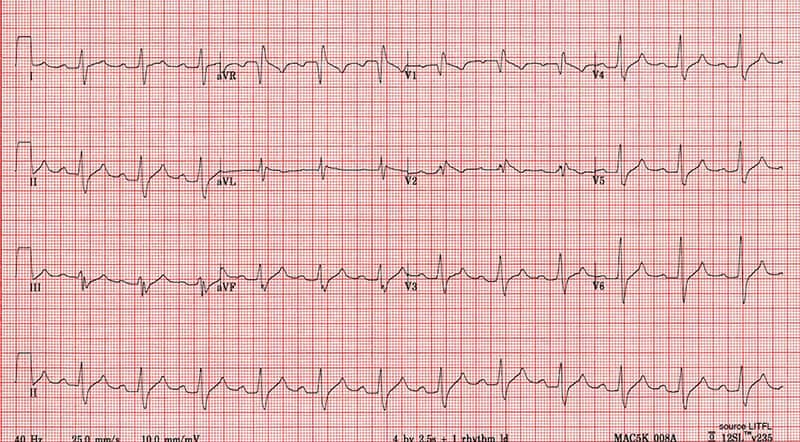 The width of the QRS is predictive of seizures or arrhythmias, however it is not wide enough in this ECG.

ECG Changes that occur and what may be predictive

What are the priorities in this patient?

Let’s compare this to a tricyclic overdose ECG shown below and we see a similarity, especially in the R wave in aVR. Why is this?  This may give clues as to some similarity in treatment.

Initial rapid stabilisation is required. If the patient is in cardiac arrest, ACLS arrest protocols should be followed.

Seizures should be treated with benzodiazepines ie midazolam 0.15mg/kg

Arrhythmias should be treated with sodium bicarbonate(NaHCO3). Avoid Procainaimide, Amiodarone or Flecainide, as the sodium channels are already poisoned.

In early presentations and large ingestions, in patients with a normal conscious state, there is a place for charcoal.

In patients that require intubation, due to a depressed conscious state aim for ventilation to result in a pH 7.5-7.55

The widened QRS and terminal R wave in AVR should be treated as per tricyclics with NaHCO3. 1-2mmol/kg every 2 minutes until QRS normalises.

What would my approach be?

In any patient that presents early with a significant ingestion:

Let’s Compare this with something similar:

A 23 year old woman is brought to the emergency department with a depressed conscious state. She is believed to have taken an overdose, but of unknown substance. She was seen one hour prior to being found by her mother in an altered conscious state.

There is no evidence of trauma, and a past medical history of depression.

On arrivals the patients vitals are:

The patient’s ECG is handed to you:

The rate is about 126bpm. So its not likely to be a Beta blocker, however the Na channel blockage changes are present in aVR, with a terminal R wave. This is a tricyclic overdose.

Notice the Na channel blockage and the need to treat this patient with NaHCO3. In fact this is the main treatment.

Prior to any management strategies the patient becomes unresponsive and pulseless. The rhythm strip shows the following. You commence CPR and ACLS measures and your registrar intubates the patient ‘cold’.

What drug do you avoid giving here?