I’m called. It’s about 4am and the registrar needs assistance with the sedation.

Grumble, grumble, but I know it needs to be done. Get out of bed, no socks, tracky pants, splash water on my face, brush teeth and in I go…..

The patient is sitting comfortably with the left shoulder lower than the right, plus some inward rotation of the humerus. There is no flattening of the shoulder and the humeral head appears to be in the right position on palpation. The arm is neurovascularly intact. I’m awake now…..something doesn’t make sense.

At this point the patient is refusing an X-ray, as she has had several X-rays before and states that the shoulder has been put in previously and a single x-ray is done post reduction, to minimise the number of X-rays done. She states that she is pregnant and doesn’t wish imaging.

There is no record of this patient in our hospital, however discharge notes from another department show that the shoulder was recently reduced and a post reduction x-ray was done, but no pre-reduction x-ray.

I attempt some gentle manipulation, however, when there is any movement, the patient becomes distressed. When left alone, she is comfortable and even using her phone, to get onto social media.

Following discussion with the patient and because the clinical picture just doesn’t fit, an x-ray of the joint (with shielding) is taken as shown below.

The trans-scapular Y view is shown here. The humeral head should normally be centered over the center of the Y formed by the coracoid, blade of the scapula and spine of the scapula (acromion). In this view it isn’t as centred.

In this AP view below we see the ‘lightbulb sign’. This is a radiographic appearance. It occurs because a posteriorly dislocated shoulder is internally rotated, causing a lightbulb appearance in the AP view. 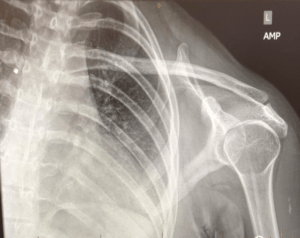 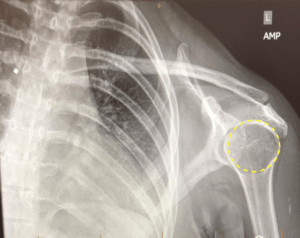 Is this a posterior dislocation?

Posterior Glenohumeral joint dislocations account for about 4% of shoulder dislocations and result from the humeral head being forced posteriorly, whilst in internal rotation, with the arm abducted. These types of dislocations usually result from significant forces, such as trauma, electrocution and seizures, but can also occur in rotator cuff muscle abnormalities.

The dislocation can be missed on AP views. Important signs to look for include:

In this particular patient there did not appear to be a dislocation clinically, regardless of the ‘lightbulb sign’. In situations such as this, an axial film can be done.

This is shown below and clearly demonstrates that this is not a dislocation. The humeral head articulates with the glenoid. 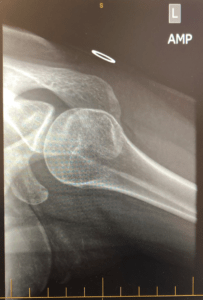 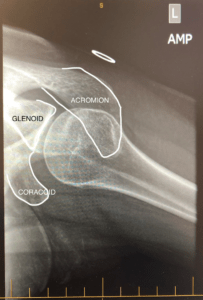 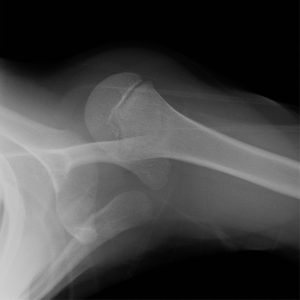 In contrast, above is an example that quite clearly demonstrates disruption of the joint: Case courtesy of A.Prof Frank Gaillard, Radiopaedia.org. From the case rID: 10778

I looked on the narcotics register and saw that the patient had been ‘doctor shopping’ and had received a significant number of scripts for analgesics.

I further discussed the findings with the patient. The joint was not dislocated and that no further analgesia would be given. I also advised the patient that I would be speaking with her GP in the morning (which was about now) about prescribing analgesia.

The patient then moved the arm normally and self discharged.

The lesson here is that the lightbulb sign, is purely an appearance on the x-ray and doesn’t mean the joint is dislocated. Posterior dislocations can also be difficult to diagnose and can be missed, especially in the elderly. When in doubt, look for the signs mentioned above and remember that an axial view is helpful.