A 25-year-old patient presents with recurrent lithium button battery ingestion. She had been admitted with the same presentation 3 week before and had undergone urgent endoscopic removal of the button battery. It was noted on the operation note, that the oesophagus had “significant erosions” at approx. 23 cm and evidence of early stricture formation. On this presentation the patient had ingested the battery approx. 20 mins prior to presentation. She was complaining of severe burning retrosternal pain and the inability to swallow saliva. Given the presentation was very suggestive of lithium button battery lodged at the level of the existing stricture it was decided to emergently remove the battery. The on call surgeon attended promptly and after review of the chest x-ray the patient went to theatre. The PA and Lateral chest x-rays are shown below. The characteristic “halo” sign was present on the erect PA image. The lateral shows the same haloing effect and hints at the step appearance of the smaller negative terminal of the button battery. 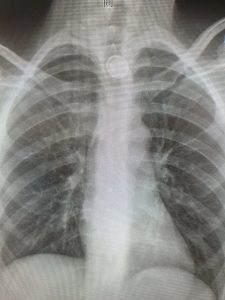 So called button batteries come is several forms, the most commonly seen are the lithium button batteries that are found with increasing frequency in personal electronic devices, toys etc. They have a lithium anode and the cathode may be manganese dioxide, carbon monofluoride (3Volt) or copper oxide (1.5 volt). The most commonly encountered lithium batteries are those with a manganese dioxide cathode; they can be identified by the prefix “C”. Batteries range in size from around 4mm to 44 mm in diameter. They are coded in such a way as to specify their dimensions; the battery removed from this patient was a CR2032- the diameter was 20mm and the height was 3.2mm. The batteries themselves may be toxic over a long period but the injury from ingestion occurs when the anode face of the battery comes in contact with the moist electrolyte-rich oesophageal tissue. This generates a circuit which allows current to flow, leading to a hydrolysis reaction that produces a sodium hydroxide build-up, near the battery’s anode face. The tissue in contact with the anode undergoes liquefactive necrosis and an alkaline burn ensues. This can lead to acute or delayed perforations or late strictures. This is obviously a time dependent process and the longer the battery is in contact with the musosa the greater the likelihood of severe burns. The larger the diameter of the battery the greater the likelihood of it becoming impacted and therefore starting to create a circuit. 20mm/3v button batteries are responsible for the largest number of fatalities from button battery ingestion, accounting for 90% of deaths; in fact the CR2032 battery found in this case accounts for 70% of all mortality from button battery ingestion. (1)

If the button battery is shown to be impacted in the oesophagus the definitive treatment is endoscopic removal as soon a practically possible. Severe burns can occur within 2 hrs of impaction (2). Should endoscopy be delayed(which it shouldn’t be), can injury severity can be mitigated with other therapies? A interesting paper earlier this year (3) demonstrated the significant protectant effect of sucralfate; an aluminium salt that is structurally similar to heparin, without any anticoagulant effect, which acts as a barrier to mucosal erosion. More exciting and certainly more practical, given the fact that most of these ingestions occur at home in paediatric patients, is the apparent protective effect of ingesting honey. This was found to be both significant and better than sucralfate. I suspect children will be much more forebearing to the offer of sweet honey rather sucralfate and parents who suspect ingestion could give it prehospital. The authors investigated several different products with Brazilian Madhava honey and New Zealand Makuna honey coming out top. When the Arizona Wildflower Honey was compared with sulcrafate in a porcine model both were significantly more protective than nothing and the honey was still the best. 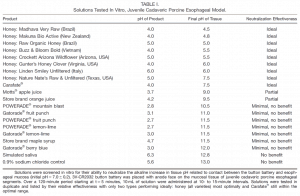 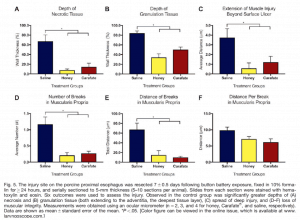 Back to Our patient

Our patient did not receive any honey, but was transferred to theatre promptly and underwent endoscopic removal of the battery. At endoscopy (shown below) significant old burns and strictures were found as well as some new damage. The patient had oesophageal rest with an NG feeding tube inserted under endoscopic vision to avoid perforation. 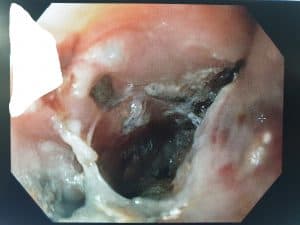 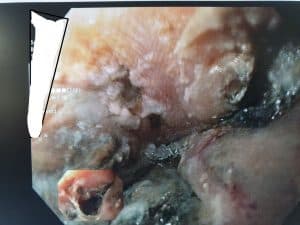