Up to 60% of children that come to Emergency Departments with a head injury have a CT brain, even though less than 1% have an injury that truly needs it.

That is an important and significant fact!
Children are brought into the Emergency Department frequently post a fall, with minor head injury. Sometimes they come directly from home and sometimes from their local doctor. In unwell children, with significant head injury, a CT is needed, however most head injuries that we see in children are low risk injuries, ie., falling over whilst playing, hit their head on a wall, or the common fall and “hit the edge of the coffee table”. Those are the cases we need to sort. The worst position to be in, in my view, is when parents come in expecting to get a CT brain for their child because their General Practitioner has told them they need one. This is when we need to have confidence in the evidence.

We now have guidelines that tell us what to do in children with low risk head injury and they include variables such as age and height of fall and even length of loss of consciousness. They are accepted, validated and widely used and help us discuss in an open and straightforward manner with the parents, the appropriate management of their child. They are the PECARN RULES. PECARN stands for Paediatric Emergency Care Applied Research Network. The paper is titled ‘Identification of children at very low risk of clinically-important brain injuries after head trauma: a prospective cohort study.’ Lancet 2009; 374: 1160-70.

This was a prospective cohort study with over 42,000 patients. They included children that didn’t have coagulation issues etc and no-one with GCS < 14. One of the most important things I took away from this paper, was that the chance of a clinically significant traumatic brain injury in this children with minor head injury, was about 0.85%. So if you did nothing at all, when one of these children came in(and I’m not suggesting you do this), in 99.15% of cases, that child would be fine.

The aim of the study, was to determine a group of low risk criteria, where the risk of a significant brain injury was less than the risk of CT induced malignancy, which is about 1 in 2000 scans.

The great thing about this study was that they split the results into 3 groups:

The children studied were split into 2 groups: < 2 years old and > 2 years old. 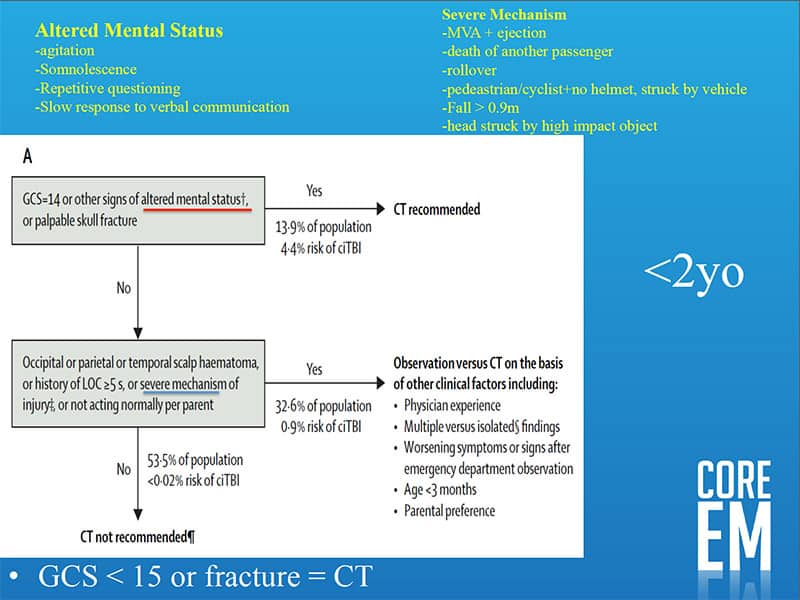 If the GCS is < 15, or if the child has an altered mental state, which included agitation, somnolescence and repetitive questioning, a CT brain is recommended, as there is a 4.5% chance of significant injury.

If none of these findings are present, we are already in a risk group of less than 1% chance of significant brain injury and these patients can be observed or sent home.
The next question to ask is;  Is there a scalp haematoma-anywhere except frontal?  OR
Has there been a loss of consciousness(LOC) > 5seconds? Here we have a time frame for LOC. If the LOC is less than 5 seconds it’s OK.
The third question to ask relates to the severity of mechanism? Severe mechanism is defined as a fall of > 0.9m. Here we actually have a height reference. Others relate to high impact object or a motovehicle accident, which is a rollover, or ejection, or someone has died at the scene etc. If any of those things are in place, there is about a 0.9% risk of significant injury and observation of these patients is recommended. If there is any deterioration a CT can be performed. It is an area where there can be discussion with the parents and depending on their wishes, the physicians experience and how young the child is, a decision can be made. I watch all these children.

In the > 2yo group, the same areas are covered. If

These children all need a CT Brain. 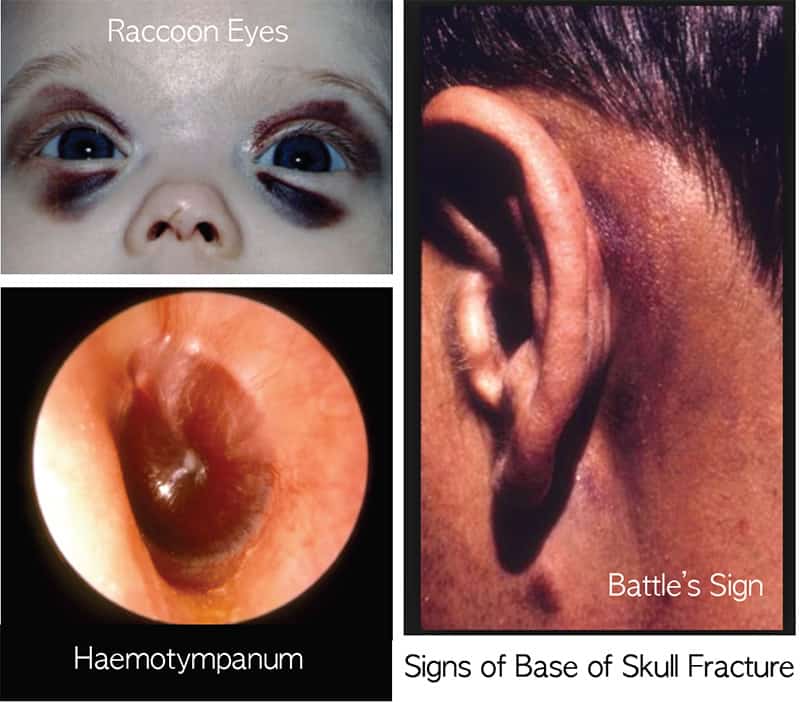 Otherwise we need to know if there has been any LOC, any vomiting, severe headache and as before a severe mechanism of injury. What changes in mechanism now, is that the height is increased to a fall of > 1.5m. If any of this second group are present, observation is recommended as there is a 0.9% chance of significant brain injury. If none are present then discharge is advised as the risk of significant injury falls to < 0.05% i.e., less than 5 in 10,000 or 1 in 2000, which is about the risk of a CT.

The California chapter of ACEP have provided a downloadable version of the 2 cards that you can keep on your phone as jpegs or PDF and discuss with patient’s parents. Here they are for you to download.

Dr Peter Kas gave a 14 minute talk at last year’s EMCORE on the PECARN rules as well as his own HAGLE formula. 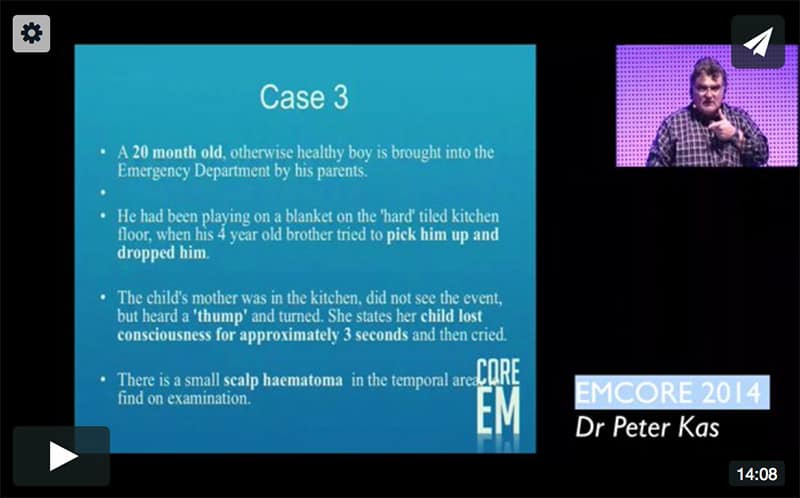