Fever in the ED

Fever In The Emergency Department

We like to see things as binary in the ED, troponins, d-dimers, CTPA they all give yes no answers. We often treat fever in a similar way, fever = infection just like our mothers taught us. But are we any better than a hand on the forehead, can we use temperature to help us manage our patients better?

Early in our training we are taught to drill down the history for infective symptoms and fever, later we learn to check if paracetamol was taken before coming in and recording that reassuring 37.2 .

The recent literature actually muddies the water over what we were taught, was a hard sign. 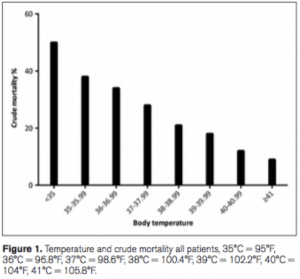 Sunden-Cullberg et al(1) showed that in over 2000 patients admitted to the ICU from the ED with fever, mortality correlated directly with grade of fever. The obvious issue with this is patients with fever will be identified as septic earlier and receive more prompt treatment. However the mortality trend persisted across all sub groups regardless of age, pathogen, lactate or speed of sepsis bundle delivery.

This raises the question often postulated, “Is fever beneficial?” It is certainly costly in terms of energy, yet it has been preserved across evolution.  In experimental data it certainly should be, Prescott et al(2) showed reduced growth rates of bacteria at temperatures over 37 degrees and Mackowiak et al(3) showed that anti-microbials were more effective at higher temperatures.

The HEAT trial by Young et al(4) attempted to investigate if treating 700 septic patients with paracetamol or placebo had any effect on mortality. The trial was limited to ICU patients and had a number of protocol violations, but found no mortality difference.

To blur the picture further, Roghmann et al(5) showed that for each decade of age over 18, the average temperature in the first 3 days of infection was 0.15 degrees lower. Baseline temperatures in the elderly were also noted to be lower. Beware the afebrile elderly patient.

It is difficult to talk about PE without D-Dimer to help avoid missed VTE. So we really should think about thermometers if we are talking about fever to avoid missed cases of infection.

So where do you take it the temperature? Ear, mouth, axilla or rectum?

Niven et al(6) performed a meta-analysis of 75 studies with over 8000 patients, comparing peripheral methods of temperature management (tympanic, oral, axilliary) vs central (rectal or esophageal). They found measurements were between -1.44 to +1.46 degrees of the gold standard centrally taken temperature, with a pooled sensitivity for fever of 64% and a specificity of 96%.

Bijur et al(7) went on to replicate this, quoting the sensitivities and specificity in the table shown, for different methods of temperature measurement to detect a fever of 38 degrees.

Given we mentioned PE, the methods we commonly use in the ED for measuring temperature are about as good as D-Dimer. So treat it the same way, it is a rule in not a rule out.

What do we know?

The key take away that fever is not binary for sepsis, if it is there or it isn’t, you need to be suspicious. Be careful how you measure temperature, use it as a rule in and be careful when you ask your nurses for rectal temperatures…