Difficult Airway Cases: What would you do?

Airway management is frightening, especially if you don’t do it often.

Having a plan when we approach an airway is important. My plan involves:

Situations can arise that may the airway difficult or impossible.  During the airway workshop, we usually pre-empt some of the potential difficult scenarios that may arise. Here are two of those cases.

A 30 year old male is brought in by ambulance with seizures. He has a known brain injury and is on multiple medications. Earlier in the morning he was seen in his room in the boarding house in which he lives.When checked on again, he was found to be having a tonic clonic seizure. When the ambulance arrives he is still seizing.

He gets treated with midazolam, initially 7mg and then a second dose of 7mg. On arrival to the emergency department, he is tachycardic, with eyes deviated to the left. The decision is made to intubate the patient.

Propofol and suxamethonium are used and approximately 45 seconds later, fasciculations occur and the patient has flaccid paralysis in the limbs. The bag valve mask is removed to intubate, however the mouth is clenched shut. There is masseter spasm.

WHAT IS IT AND WHAT DO YOU DO?

Masseter spasm may be an early indicator of malignant hyperthermia. The other clinical signs are hyperpyrexia, increased ETCO2 and there may be generalised rigidity and rhabdomyolysis.

The treatment is Dantrolene 2.5mg/kg IV repeated 5-10 minutely, with no real maximum dose.

BUT WHAT ABOUT THE AIRWAY?

The options here are to see if ventilation is still possible with nasopharyngeal airway and bag valve mask, Otherwise a nasotracheal intubation can be attempted. If all else fails, a surgical airway may be needed. 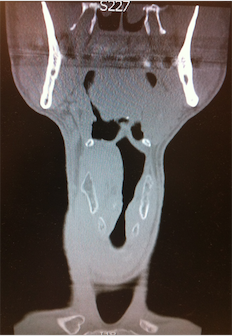 A 43 year old male is brought into the department. He has been punched to the throat. He has a hoarse voice and stridor, but is in no distress. A CT is performed of his neck. There is an undisplayed laryngeal fracture and an obvious haematoma.

His breathing becomes laboured. He has a small amount of haemoptysis and he begins to desaturate. He needs a definitive airway.

WHAT DO YOU DO AND WHAT DON’T YOU DO?

Anything that is a blind intubation(such as nasal intubation) is dangerous as it may disrupt the haematoma.

Awake fiberoptic, purely because of railroading of the tube has resulted in laryngotracheal separation, is not advised.

Surgical or needle cricothyrotomy would be at the level of the haematoma and may worsen the situation, as would percutaneous tracheostomy.

A formal surgical tracheostomy, or rigid bronchoscopy under general anaesthesia.