Cyanosis or Something Else?

A 75 year old gentleman presented with acute on chronic abdominal pain. His triage noted that he was “centrally cyanosed, but comfortable” and that his daughter had reassured the concerned triage nurse that his skin was usually that colour and there was nothing to be concerned about.

When I called the patient from the waiting room I was taken aback by his colouration- he was a deep silver/grey colour, but otherwise hale and hearty.

The consultation followed a familiar pattern and we addressed his presenting complaint. Towards the end the consultation I felt obliged to ask about the origins of his pigment abnormality. He and his daughter were most forthcoming. He had boasted the same rosy complexion as his daughter until 5 years before when he had been diagnosed with a malignancy. He had chosen to take some adjunctive alternative therapies as part of his treatments. There had included silver colloid containing drinks. He had subsequently gone silver over a period of a few months and had remained so ever since.

This is my first experience of a rare dermatological oddity called argyria.

First described in 1840 when medicinal use of silver salts was widespread. “Argyrosis” was used to refer to the localised blue grey discolouration cornea that is an early sign of argyria.

Argyria is normally associated with chronic low level ingestion of silver salts. The normal level of silver in plasma is <3 μg/L. The majority of argyria cases are the result of dose-dependent, chronic ingestion of soluble silver, although there are some cases of exposure of disrupted skin surfaces to silver-coated burn dressings resulting in localised argyria (1,2) The pigmentation has been described as becoming darker and more pronounced when exposed to UV light, but the mechanism is unknown.

The pigmentation is usually irreversible and does not respond to chelation therapy. There is a case report of successful treatment with YAG laser. (3)

Argyria can cause concerns, as in this case, of central cyanosis and lead to unnecessary anxiety to staff and investigation of patients. It should be noted that argyria does not interfere with accurate pulse oximetry.

Systemic toxicity from silver is rare and may result in cardiac conduction abnormalities as well as irreversible neurological damage, seizures, motor weakness and rigidity. (4)

Argyria can be confused with several other clinical entities and they should be excluded before the benign diagnosis of argyria is reached, although it is usually clear from the history. 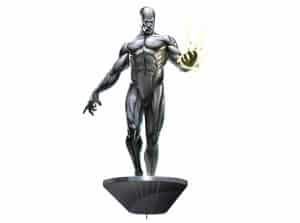