A 25 year old male presents to the emergency department following a near syncopal episode. His ECG shows a supraventricular tachycardia(SVT). Vagal manoeuvres are attempted, unsuccessfully. Adenosine is then given for reversion. He reverts and his post-reversion ECG is shown below. One of the registrars is concerned that the ECG is showing a Brugada pattern.

Is this right? Is this a Brugada Pattern and has the patient demonstrated Brugada Syndrome? Do patients with Brugada even present with an SVT?

How do we make the diagnosis and what do we look for in the ECG? Brugada is one of the ECG’s of Syncope, that we cover in the Cardiac Bootcamp. 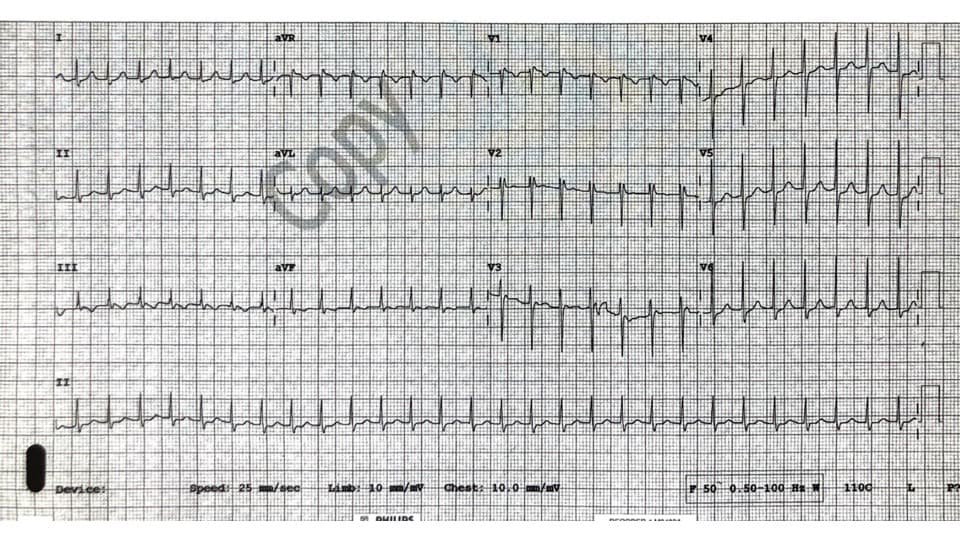 SVT in patient with pre-syncope

What is Brugada Syndrome?

It is an inherited autosomal dominant Na+ channel abnormality(1). It is far more common in males (by factor of 8-10:1) where it is the second most common cause of death in those less than 40 years of age. The true prevalence is difficult to estimate, as it is a dynamic ECG pattern, ie., it is not always present. It is usually associated with sudden death in those with structurally normal hearts.

It’s prevalence is about 5/10000 of the population, being responsible for approximately 4% of all sudden cardiac deaths. It has a high prevalence in South-East Asia and is the same disorder as the previously known Sudden Unexplained Nocturnal Death Syndrome(SUNDS)(2)

Patients may suffer sudden cardiac death, or present in cardiac arrest, usually with polymorphic ventricular tachycardia or ventricular fibrillation(VF) being the most common arrhythmias. Patients with the syndrome, may also present following a syncopal episode, which may be a result of self-termination of the arrhythmia. 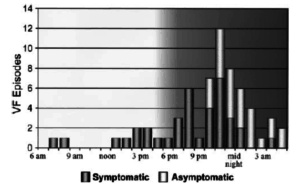 Beware the patient whose partner or family member describe nocturnal agonal respirations, as  VF and sudden death in Brugada usually occurs at night or at rest(2). This may be due to sympathovagal balance or bradycardia which may initiate the arrhythmia.

The diagnosis is made when both:

The changes seen on ECG, known as the Brugada pattern may be concealed, intermittent or dynamic, probably secondary to the Na+ channel dysfunction being affected by several factors.

The pattern is more likely to be seen in the following circumstances:

These changes seen in leads V1 or V2 or both are shown below. 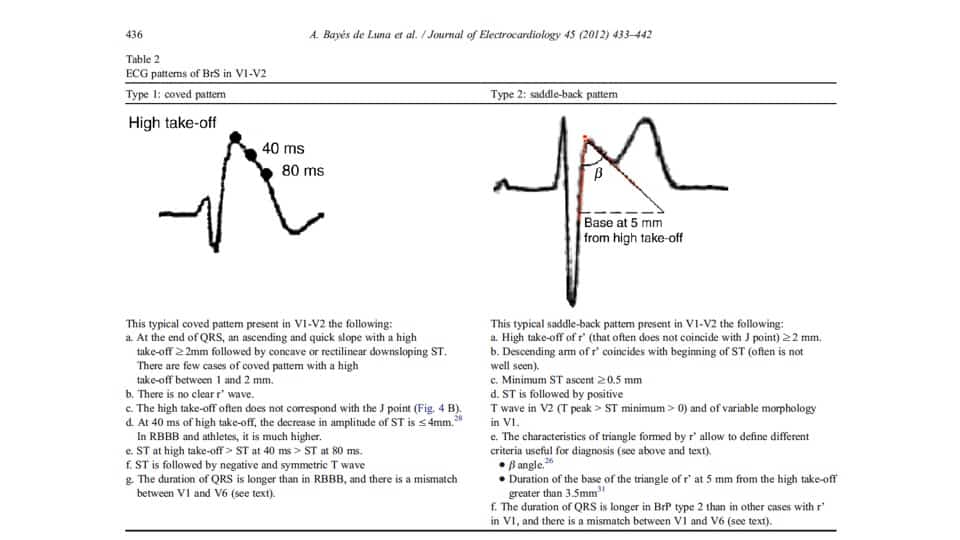 This is a very specific pattern and in patients with no heart disease is highly specific for Brugada.

The important elements of the pattern are:

It has a concave or rectilinear pattern in V1 or V2

This pattern combines the previous Type II and III patterns into a new Type II pattern.

There must be an RSr’ pattern with a saddle-back morphology. The r’ is usually more than 2mm above the isoelectric line.

This morphology can be a normal finding on ECGs. To distinguish a normal morphology from a saddle-back pattern  of Brugada we need to calculate the beta angle as shown below. A wide beta angle (> 35 degrees) indicates a Brugada pattern. 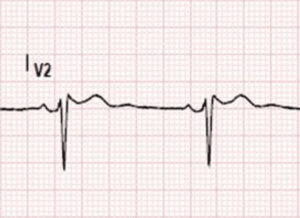 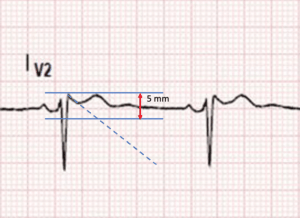 Then draw a line along the descending arm of r’

If the length of the base of the triangle is >3.5mm, this equates to a beta angle of >35 degrees and confirms that this is Brugada

Now let’s revisit the example above where the patient was reverted with Adenosine. 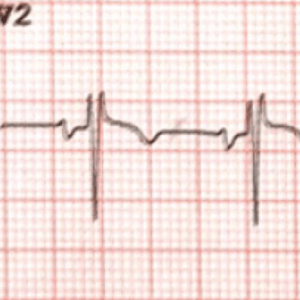 Draw the necessary lines as in the previous example

The beta angle is less than 35 degrees (base <3.5mm) so this is not Brugada

If there is a suggestion of a Brugada pattern in V1-V2, a further ecg should be performed with high precordial leads as shown. This simply means moving the leads V1 and V2 from the 4th intercostal spaces to the second or third. This allows the leads to be closer to the affected zone, which usually coincides with the RVOT and unmask the abnormality. We are looking for the Type I coved pattern to be unmasked in these high precordial leads.

Beware, that a false Type II Saddleback pattern can occur, if the V1 and V2 leads are placed too high. A clue to their misplacement is given by the P wave in V2. This should normally be upright. If it is not, then be suspicious of high leads and redo the ECG.

To make the diagnosis of Brugada Syndrome we need both the ECG patterns described above and the clinical features that may give us a clue to the syndrome, being present. These include:

Other things that may assist us are the inducibility of VT with electrical stimulation.

Other things to consider

There are so called Brugada phenocopies, which are Brugada patterns arising from various causes which can include: 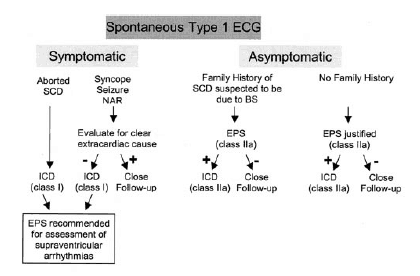