Back-stabbing: A case of Brown-Sequard Syndrome

Brown-Sequard syndrome is one of those cases that we are all aware of, have studied for exams and have pondered the anatomy of, but few have ever seen. First noted by Charles-Édouard Brown-Séquard in 1851 who, despite having some rather eccentric ideas about sexual prowess and the eating of primate testes, was a renowned anatomist and physiologist. He noted that the pathways transmitting pain, temperature and light touch underwent decussation within the spinal cord after examining victims of cane cutting accidents in Mauritius in 1851. (1)

Brown –Sequard syndrome is a rare entity, particularly in its pure form. It is caused by the hemi-transection of the spinal cord. Penetrating injury is the most common cause of Brown-Sequard syndrome, but other mechanisms have been described leading to a Brown-Sequard type picture including; blunt injury from motor vehicle accident, spontaneous epidural haematoma, stroke and even manipulation of the cervical spine. (2,3,4,5)

The case I will present and discuss here has a more traditional mechanism. The patient is a middle-aged lady involved in a domestic dispute. A family member stabbed her in the back with a knife. During the tussle she was also thrown against a tree trunk and stamped upon. She presented to a remote clinic in Gulf Province, Papua New Guinea. The patient complained of weakness of her right leg and numbness on her left side from the abdomen down her left leg. She was unable to walk and had been carried in.

The patient had a single penetrating wound at the level of around T6 in the left paravertebral region. There was no other evidence of penetrating or blunt injury.

I was in Australia at the time and the clinic practitioner emailed images 1 and 3 to me with a brief clinical synopsis. I telephoned the clinic back as I was suspicious of Brown-Sequard and asked for a specific examination of the power and sensation to performed and described to me whilst I was on the phone. The results confirmed my fears and I activated a medevac team from Southern Highlands province to collect the patient and transfer her to Port Moresby for imaging of her spine. My hope was that the symptoms were being caused by a traumatic epidural haematoma of the spine that may be amenable to drainage. 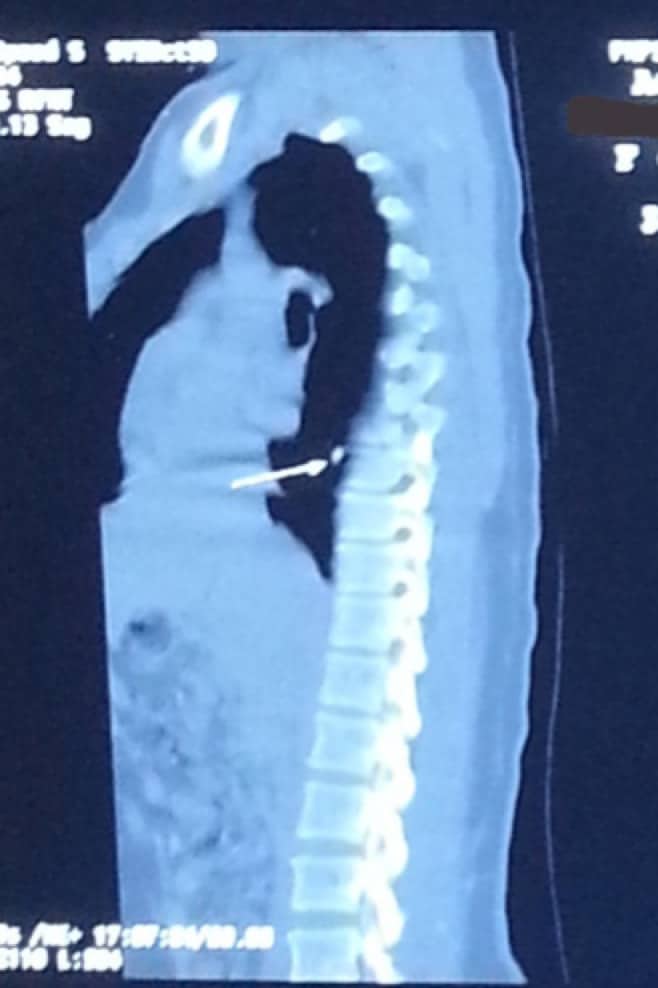 The CT slice shown demonstrates spinal fracture, the appearance of a metallic foreign body anterior to the bony of the vertebra is odd as the knife appears intact and may be a bony fragment instead. The CT myelogram demonstrated a dural tear, but no haematoma.

I saw the patient yesterday, 4 days post injury and examined her myself. Her sensory level is at T8 on the left and she has 1-2/5 power on the right with absent proprioception on that side. Unfortunately it seems the knife had penetrated the dural and hemi-sected the cord at the level of T6. The prognosis is poor.

The syndrome is characterised by the pattern of neurology outlined below:

On the side of the lesion:

Nerve root (dermatomal) loss of all sensation at the level of the lesion- complete anaesthesia- totally “numb”.

Loss of dorsal column function (joint position sense) below the level of the lesion often associated with a sensation like a tight band round that leg.

On the opposite side

Loss of pain sensation, temperature and light touch with a sensory level two nerve roots below the level of the lesion.

This is due to the fact that fibres carrying these sensations enter the cord from the dorsal root and usually ascend for one or two segments before crossing the midline to join the contralateral spinothalamic tract. So, in this case, a lesion hemi-transecting the spine at T6 would typically give a sensory level of T8 on the opposite side as the T8 fibres have only just crossed the midline at the T6 level.

To remember the neurological pattern of Brown-Sequard syndrome one should remember the fact that pain, temp and touch crossover within the spinal cord and remember the simple mnemonic below that describes the ipsilateral features of the syndrome:

R Root anaesthesia (at the level of lesion- variable)