Aschner Phenomenon in Traumatic Enucleation of the Eye

Aschner phenomenon or oculocardiac reflex is characterised by an episode of dramatic bradycardia following manipulation of extra-ocular muscles or dramatically raised intraocular pressure. The phenomenon was first described by Aschner and independently by Dagnini in 1908 (1,2). The phenomenon is well recognised in the fields of ophthalmic surgery and anaesthesia, but few cases exist in emergency medicine literature (3,4,5).

A 35 year old female presented to Moro Clinic, Southern Highlands Province, Papua New Guinea. The patient described a domestic assault by her husband 3 hours prior to presentation in which she was restrained by the neck and a sharp stick was forcibly inserted into her right orbit. She was transported to the clinic from a remote village to the clinic by relatives. 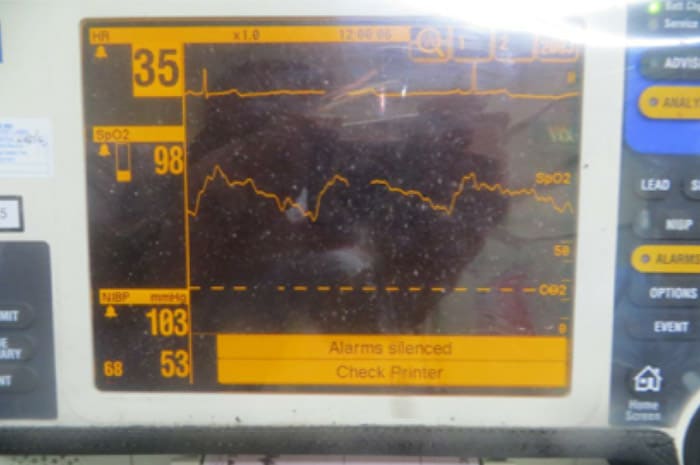 On arrival the patient had a GCS of 15, was in significant discomfort and complained of loss of vision in the right eye. Notable was her cardiovascular status with a pulse of 32/minute and a blood pressure of 103/53.(Fig 1)

Further examination suggested that she had suffered a traumatic enucleation of her right eye with fracture of the medial wall of her orbit and air in the extruded vitreous (Fig 2.).

She was treated with parenteral analgesia as a retrobulbar nerve block was contraindicated by the existing Aschner phenomenon and the possibility of retrobulbar traumatic injury causing altered anatomy. She was also administered antibiotics and antiemetics prior to rotary aeromedical transfer for surgical clearance of the orbital contents and possible repair of the fracture. Her bradycardia resolved with a single dose of 600mcg atropine intravenously and her pulse normalised to 60/minute with a blood pressure of 129/70.

The patient was transferred successfully with a Bell 212 helicopter to a provincial hospital in Mendi, Southern Highland Province, Papua New Guinea. The transfer was uneventful and the bradycardia did not recur.

The patient declined surgical clearance and repair due to cultural sensitivities and was managed with antibiotics. She took her own discharge after a week and has reportedly returned to her village.

This case raises many issues including the challenges of delivering prehospital emergency medical care to a population of approaching 7 million with 9 practicing emergency medicine specialists and the terrible burden of sexual and gender based violence in Papua New Guinea. The logistical challenges faced in delivering care to a country with over 800 distinct languages and cultures, few roads and very challenged infrastructure ensure that the development of telemedicine and aeromedical retrieval will be a major factor in the provision of services in this remote and fascinating country. These are beyond the scope of this case discussion.

We will concentrate on Aschner phenomenon. 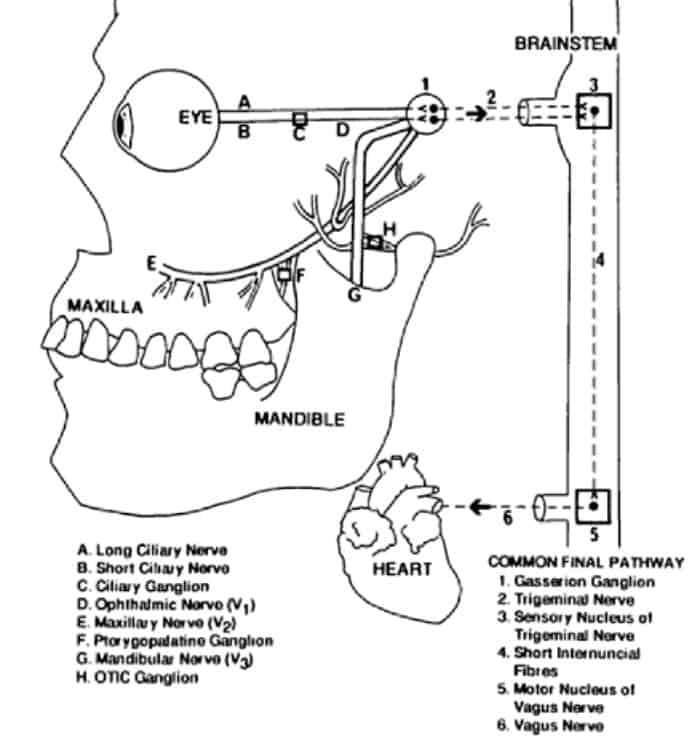 The afferent fibres of the reflex arc are within the ophthalmic division of the trigeminal nerve . The afferent pathway continues to the Gasserian ganglion, the sensory nucleus of the trigeminal nerve. In the brainstem the short internuncial nerve fibres connect the trigeminal sensory nucleus with the motor nucleus of the vagus nerve. The efferent pathway of Aschner phenomenon is mediated by the vagus nucleus and leads to the negative chronotropic effects on the heart. (Fig 3.)

Premedication of patients undergoing ophthalmic surgery with atropine is recommended to prevent this phenomenon occurring intraoperatively (4). Atropine acts by inhibiting the parasympathetic vagal innervation of the heart. In this case a single dose of atropine terminated the bradycardia and the absence of ongoing raised intraocular pressure or traction of the extraocular muscles meant the phenomenon did not recur.