A Man Walks Into a Hole.

We often start with a case and talk about a single topic. This case is a little different. It is a real-time case. What would you do with this patient every step along the way? In real life, things are not always clear-cut. Here’s the story of a man that walked into a hole and then came into the emergency department.

A 75 yo male presents with a small abrasion to the head, after what appears to be a mechanical fall. The patient describes in detail the fact that he lost his footing and fell. There was no syncope, no loss of consciousness, just a mechanical fall.

The patient has a previous history of Bipolar Disorder, Congestive cardiac Failure and a Non-ST Elevation Myocardial Infarction 2 years previously(NSTEMI).

His medications include Lithium, allopurinol frusemide and spironolactone.

His ECG is shown below. What is your reading? 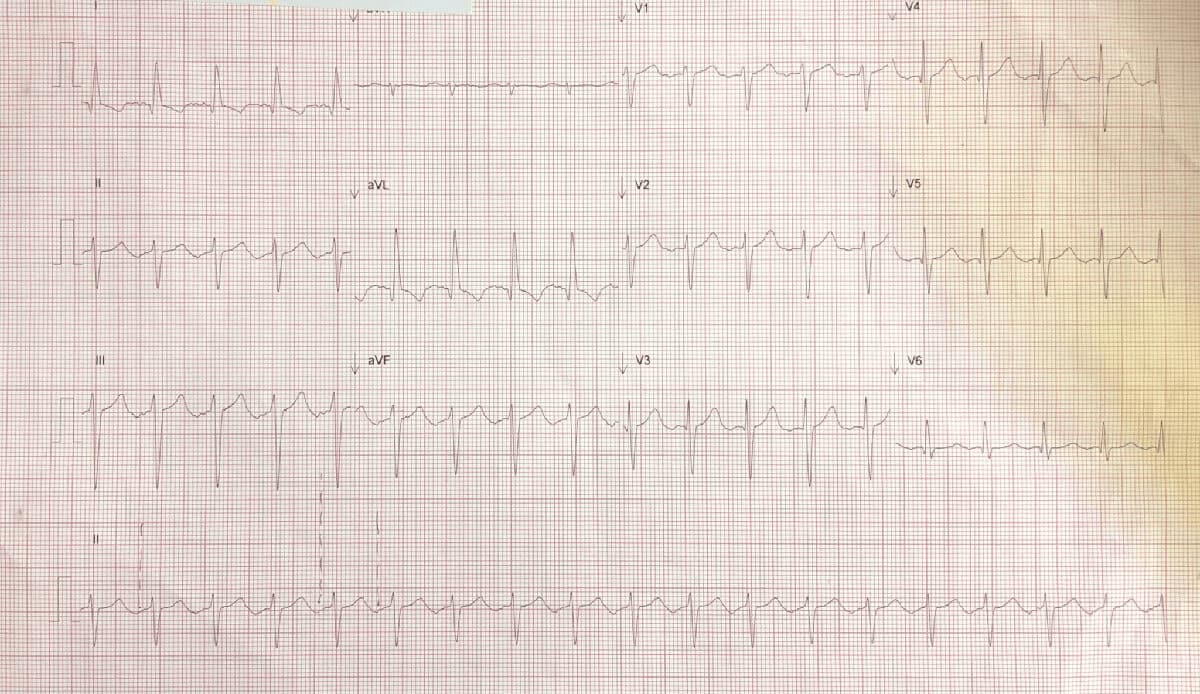 My reading of this is sinus rhythm(I can see p waves) at a rate of 114bpm. There is T wave inversion in I and aVL and the QTc is 531ms, a concern. What is the significance of the ECG changes in someone without chest pain?

Can Lithium cause the ECG changes?

The patient isn’t Lithium toxic. Perhaps some T wave changes may be caused by Lithium, however the T wave inversion is in I and aVL, a defined territory and not widespread.

Do we have an old ECG to compare with? 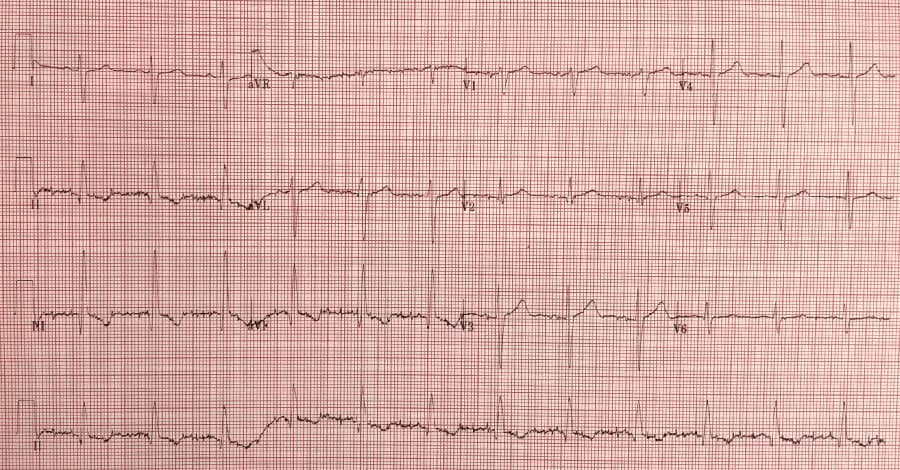 In this ECG, the patient has had inferior T wave inversions but no changes in I or aVL
This looks like an old inferior infarction.

Can Lithium Cause Renal Changes?

Lithium can cause renal changes, however these tend to be with chronic use, rather than acute toxicity. The most common is nephrogenic diabetes insipidus(NDI) and chronic tubulointerstitial nephropathy, the second causing renal insufficiency, but only a small chance of progression to end stage renal failure. Chronic lithium ingestion can lead to NDI, which results in polyuria and polydipsia.

Can Lithium Cause Troponin Changes?

The troponin is raised.

Lithium is not associated with increases in cardiac biomarkers.

Is the raised troponin related to a the raised Creatinine? It may be. The way to rule this out is to perform a serial Troponin and see if it rises further. A serial Troponin came back at 0.071- this was real, primarily because it had rapidly changed over a short period of time, it confirmed that it wasn’t renal. Another possibility, would be to take a CKMB as this is not usually raised by renal impairment.

So Is this all ischaemic? My belief was that together with the ECG findings this may have been real. The patient’s cardiologist stated that a recent cardiac angiogram was normal. So why the T wave inversions? Could this be a Type 2 cause of Troponin rise, secondary to the ongoing tachycardia?

Do we give a patient on Lithium, Aspirin?

This patient has not had chest pain, however there is a Troponin rise, some may argue for aspirin. There is concern over giving NSAID’s in patient’s with any renal impairment taking Lithium as they can affect the clearance of Lithium, resulting in raised Lithium levels. Aspirin however is an exception. It doesn’t appear to affect the lithium levels.

Does this patient need it? A single dose until we decide what is going on, will not hurt the patient. I would start it.