A 51 year old with collapse

A 51 year old male is brought into ED after collapsing at work. He had been lifting a box of shopping from the floor to a table when he collapsed. A colleague had heard a thud and entered the room to find the patient unresponsive on the floor with what sounds like agonal breathing. His colleague initiated CPR and called for the ambulance.

On arrival the patient was found to be responsive but confused and complaining of chest pain. He was transferred to the emergency department promptly. En route he was noted to be hypotensive, tachycardic, mildly hypoxic and tachypnoeic. His blood sugar was noted to have been 5.6mmol/L. He was given 500mls crystalloid en-route which settled the tachycardia.

On arrival he was still a little disorientated but able to give a history, he remained hypoxic on room air but corrected with modest supplemental oxygen. He had a systolic blood pressure of 100mmHg, and complained of chest pain that was bruising in nature. The collateral history suggested that he went pale then blue just prior to collapse, but the patient had no memory of the events. The CPR had been brief at about 3 mins before he spontaneously started to breathe normally and recovered from his cyanosis.

He had no prodrome and the only history of note was of Klinefelter Syndrome for which he received monthly testosterone injections.

The initial differential was quite broad but essentially required differentiating cardiovascular from neurological causes of collapse in the first instance.

The lack of prodrome, sudden nature of the collapse, rapid recovery with no postictal period and cyanosis all point towards a cardiorespiratory event.

His ECG is shown: 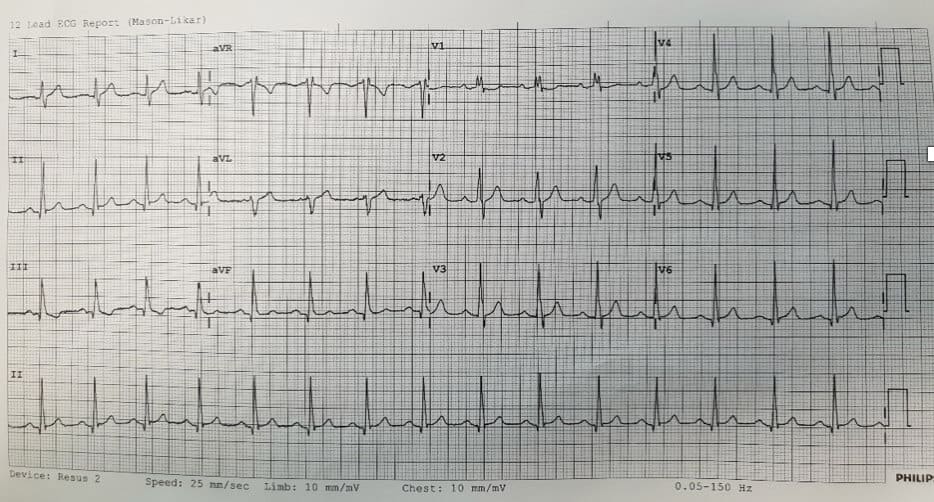 It was concluded that he had suffered a massive pulmonary embolism and cardiac arrest. The subsequent CPR had converted the massive PE to a submassive PE.

Given that he wa srelatively stable at this point he was taken to CT for a CTPA. Throbolytic doses of tenectaplase were taken with him. The CT is shown below.

His symptomatic hypoxia resolved over the next few hours and his echo at 24 hrs post thrombolysis was normal.

Issues raised by the case:

Is thrombolysis beneficial?
The European Society of Cardiology 2008 guideline concluded “Randomized trials have consistently shown that thrombolytic therapy rapidly resolves thromboembolic obstruction and exerts beneficial effects on haemodynamic parameters. In an early small trial, an 80% increase in cardiac index and a 40% decrease in pulmonary arterial pressure was observed after 72 h of streptokinase treatment. In the Plasminogen Activator Italian Multicenter Study 2, serial angiograms revealed that 100 mg of recombinant tissue plasminogen activator (rtPA) induced a 12% decrease in vascular obstruction at the end of the 2 h infusion period, whereas no change was observed in patients receiving heparin. The effect of rtPA was associated with a 30% reduction in mean pulmonary arterial pressure and a 15% increase in cardiac index. One of the largest thrombolysis trials demonstrated a significant reduction in mean RV end-diastolic area on echocardiography 3 h after treatment with rtPA.” Yep.

Peripheral vs local thrombolysis?
Again the European Cardiology Society Guideline- “Direct local infusion of rtPA via a catheter in the pulmonary artery (at a reduced dosage) was not found to offer any advantages over systemic intravenous thrombolysis. This approach should generally be avoided, as it also carries an increased risk of bleeding at the puncture site.”

Thrombectomy vs thrombolysis?
I’ll leave that topic to my more qualified colleagues to answer at EMCore Byron Bay.