Wolff-Parkinson-White Syndrome occurs in about 0.3% of the population (1), although this is an underestimate, as evidence of pre-excitation on the ECG my be transient.  The characteristic delta wave indicates that the accessory pathway conducts faster than the Atrioventricular (AV) node, thus resulting in pre-excitation. However, the refractory period of the accessory pathway may change meaning that the only way to recognise the presence of the syndrome, is to consider it, when a patient presents with palpitations and a tachycardia.

The Basics of Wolff-Parkinson-White

Some of the ECG findings that it’s known by today were first published in 1915 (2) , however it was not until Drs. Wolff, Parkinson and White described the syndrome in 1939, that it become known by its present name (3).

The ECG findings in WPW are:

The Syndrome occurs when there is conduction along an accessory pathway, leading to a tachyarrhythmia.

The PR Interval, which represents the passage of an impulse through the AV node to the HIS-PURKINJE system is in fact the same. The appearance of a short PR Interval is given by the presence of a delta wave, which is the hallmark of WPW and it signals pre-excitation. The upward slurring of the QRS complex results from premature excitation and early depolarisation of the ventricular myocardium, by an atrial impulse travelling in an anterograde (atria to ventricles) fashion through an accessory pathway, thus avoiding the blocking effects of the AV node. The early ventricular depolarization that occurs is disorganised and slow, resulting in an early widening of the QRS Complex. As AV nodal conduction occurs, the terminal QRS narrows.

The accessory pathway, first described by Kent(4) in 1893 can occupy various locations with each, altering the morphology of the QRS configuration. 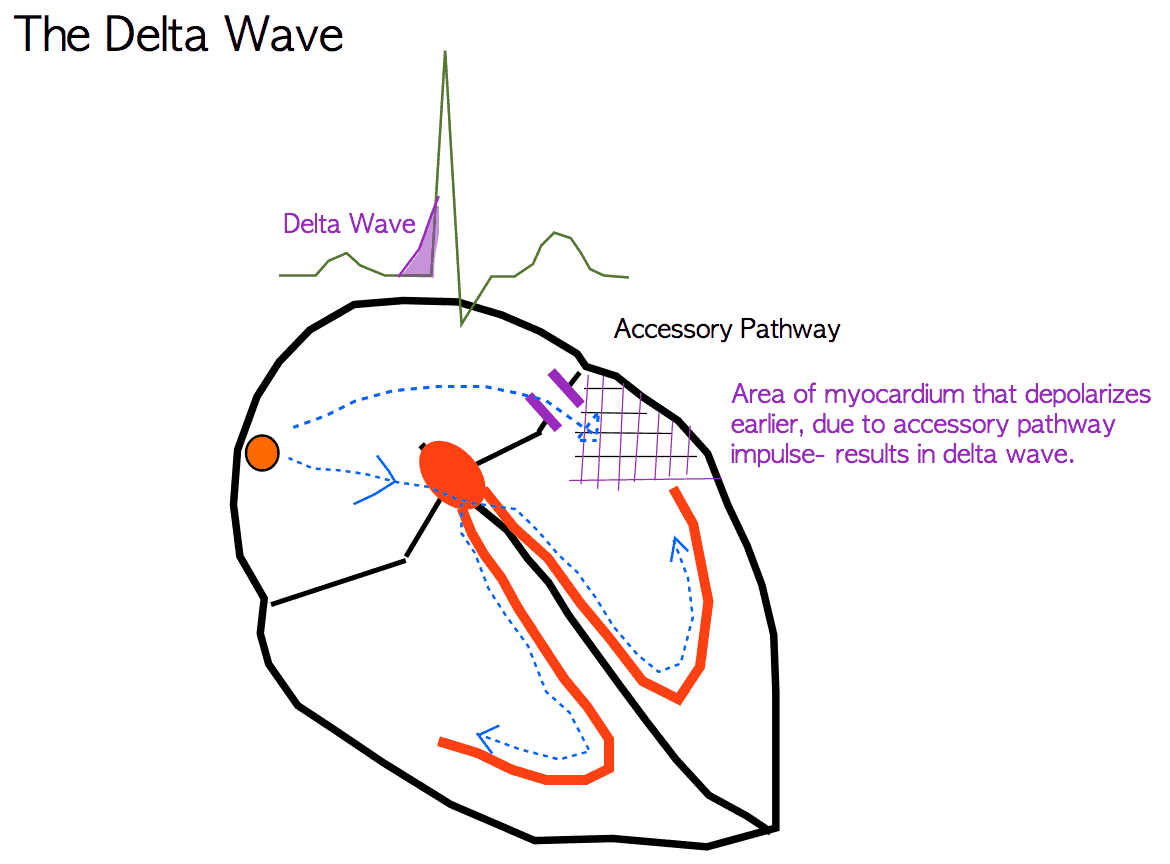 The Bundle of Kent can communicate between:

1               The Left Atrium and Left Ventricle. This is a Type A pre-excitation pattern resulting in a positive R Wave and delta wave in V1. Tall R waves and inverted T waves in V1-3 mimic right ventricular hypertrophy, which is not present. aVL has a negative delta wave and this mimics a q wave. This is a pseudo-infarction pattern. (Please note that some of the images below are taken from LITFL)

2               The Right Atrium and Right Ventricle. This is called Type B pre-excitation and results in a negative delta in V1. There is a dominant S wave in V1. There are criteria for LVH especially with tall R’s and inverted T waves in V4-6, however there is no LVH

In a further example of Type B WPW notice the pseudo-infarction pattern caused by the inverted delta waves in III and aVF. 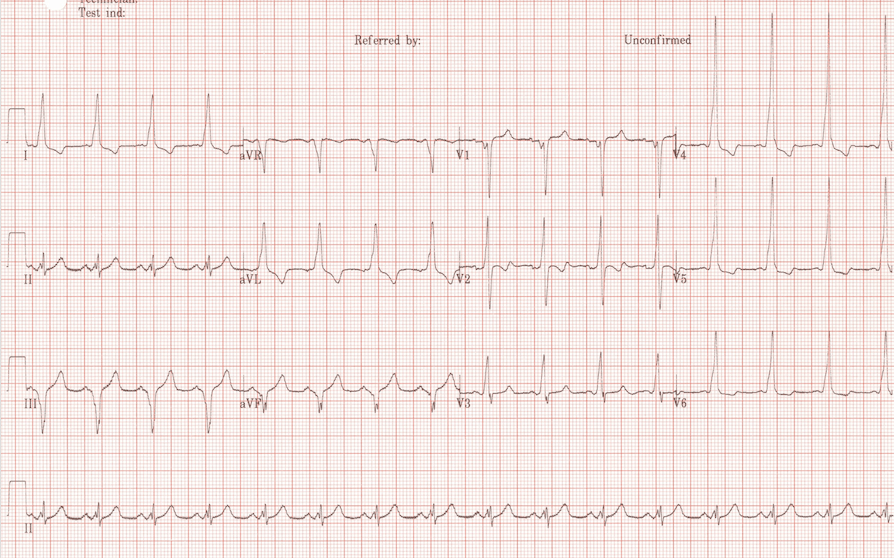 Accessory pathways have the potential to conduct in an anterograde (atria to ventricles) or retrograde (ventricles to atria) direction. 60% have bi- directional conduction (5)

Patients with WPW can present with Atrioventricular Re-entry Tachycardia, initiated by a premature atrial complex that travels down the AV node. It occurs at a time when the accessory pathway has a refractory period longer than the AV node.

This premature complex will travel down the AV node in an anterograde fashion i.e. via orthodromic conduction and depolarize the ventricles via the HIS-PURKINJE System. It will then pass back to the atria via the accessory pathway. If the atrial fibres are not refractory when they receive this impulse, they will depolarize before being depolarized by the Sino-atrial node, thus setting up a re- entrant circuit. The  QRS complexes are narrow as depolarisation is via the His- Purkinje System.

In this type of re- entrant circuit the p wave may be seen following the QRS, for a short r-p interval, although this is not exclusive to this tachycardia and cannot be used to make the diagnosis.

Above is an example of orthodromic conduction. There are no p waves seen and the rate is ~225

In approximately 5% of cases, the conduction is retrograde ie., the impulse passes down the accessory pathway and then retrogradely up the AV node. In these cases, the QRS is wide and may be indistinguishable from VT.

The ECG for retrograde tachycardia is below. Notice the broad complex tachycardia (rate 192)

Atrial fibrillation occurs in up to 30% of patients with WPW (7) and it is far more prevalent in those with evidence of pre-excitation on ECG, when compared to those with concealed pathways (54% vs 3 %) (7)

Conduction in atrial fibrillation is almost always antidromic, ie ., down the accessory pathway and up the AV node resulting in a wider QRS complex. 25% of patients with WPW have accessory pathways with short anterograde refractory periods. The short refractory period allows 1:1 conduction of impulses, resulting in very rapid ventricular responses, which may result in a deterioration of rhythm to ventricular fibrillation(9).

An R-R interval of <250msec (6.25 small squares) during atrial fibrillation is a marker for the development of ventricular fibrillation in patients with WPW (10)

The ECG for atrial fibrillation and WPW will be: 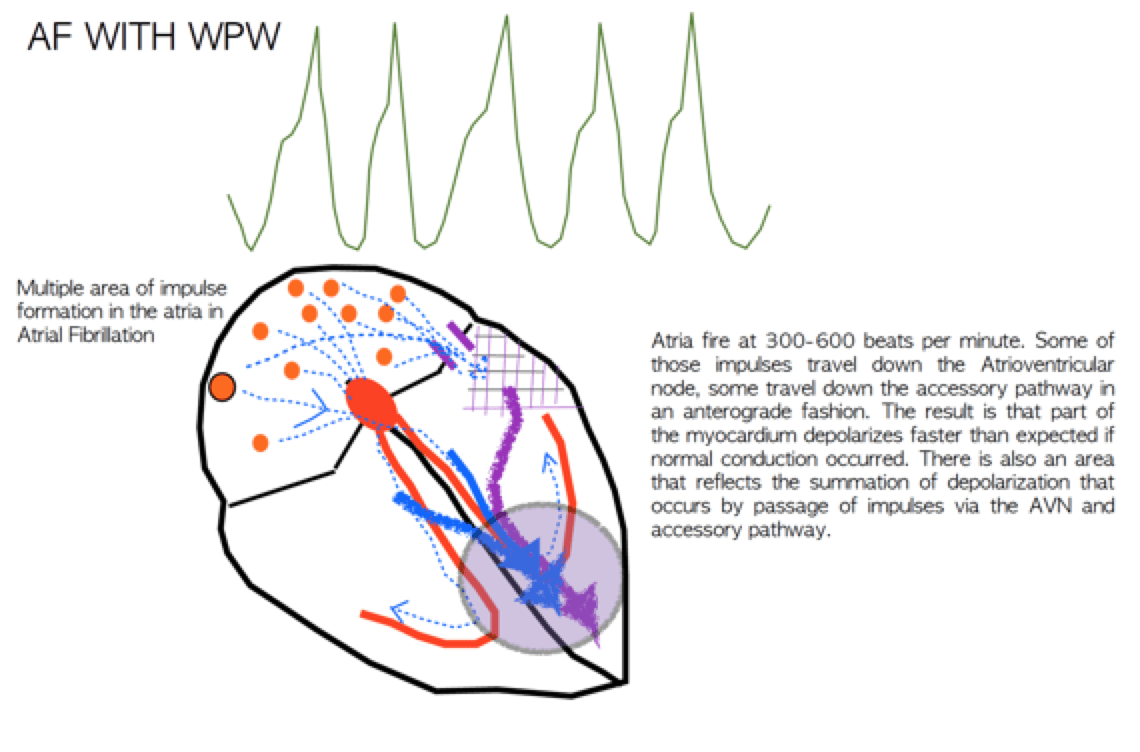 Notice the very fast rates, in many cases approaching 300 bpm.

The morphology of the QRS varies and the complexes are irregularly irregular.

Sometimes however, it is difficult to differentiate from VT. However if we look below, it is not the classic twisting of the points.

The differential diagnosis for wide irregular tachycardia is

Atrial Flutter with WPW is far less common than atrial fibrillation, however conduction is similar to atrial fibrillation. The impulse travels down the accessory pathway and up the AV node in a retrograde fashion, resulting in a wide QRS complex and rates approaching 300 bpm.

Notice the regular wide complex tachycardia here at rates of 300. This is far too fast to be VT.

MANAGEMENT OF PATIENTS WITH AF AND WPW

The 2014 American Heart Association guidelines on the management of atrial fibrillation and WPW , have changed from previously and state: “Administration of amiodarone, adenosine, digoxin or non dihydropyridine calcium channel antagonists in patients with WPW syndrome who have pre-excited AF is potentially harmful as they accelerate the ventricular rate”(12)

Rule 2:  VT rarely, if ever, is faster than 180 bpm. ECG’s with rates greater than 200-220bpm, must make you suspicious for an accessory pathway.

Rule 3:  VT is a regular rhythm. It is exquisitely regular

Rule 4:  In a rapid wide complex rhythm, the morphology of the QRS, should be the same, ie., QRS morphology should not change. If it does, it may be polymorphic VT(look for the twisting around the axis) or it may be atrial fibrillation with WPW

The solution: Any wide(>16msec) regular or irregular tachycardia, greater than 200bpm, give 200J.