A recent clinical practice article in the NEJM(1) on Transient Ischaemic Attack (TIA) gave a nice summary of this topic.

Current guidelines that are good reference sources on stroke and TIA management include:

The new definition of TIA is a tissue based definition, rather than a time based definition as previously. A TIA is an ischaemic episode lasting less than 60 minutes with no evidence of infarction (5). This definition therefore includes the results of imaging, because up to 50% of patients with an initial diagnosis of TIA are found to have infarctions on diffusion weighted MRI.

Clinically however, a TIA and a minor ischaemic stroke is managed in the same way.

Recognition of stroke in Emergency Room(ROSIER) is a validated rule for differentiating acute stroke from its mimics.

Any of the following that is new onset favours stroke:

Loss of consciousness and seizure activity, indicate stroke mimics rather than stroke.

Risk of Stroke following a TIA

The risk of stroke within 3 months of a TIA has been estimated to be as high as 20%, with the greatest risk being in the first 10 days. However the use of risk prevention strategies may have decreased this risk considerably(6).

Investigation of the TIA Patient

The ABCD2 score is used to assess the risk of stroke(7), especially in the first 2 days post TIA. The score ranges from 0-7 and takes into account factors of: 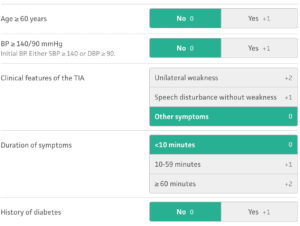 More recently the ABCD2-I and ABCD3-I scores have been used.

Should we use these ABCD scores?

The NICE guidelines recommend AGAINST using the scores as they are poor at discriminating low and high risk of stroke after TIA, when used in isolation. The addition of brain imaging modestly improves discrimination. “All cases of suspected TIA should be considered as potentially high risk for stroke”. (3)

In non-cardioembolic events it decreases the rate of stroke in the first 90 days. It’s benefit beyond 90 days is uncertain.(10) Give a loading dose of 300mg oral, followed by 75-100mg daily for 90 days.

Combination therapy of Aspirin and Clopidogrel may further decrease the risk of major ischaemic events, however there is uncertainty about it being associated with a higher risk of major haemorrhage at 90 days than aspirin alone.(11, 12)

If atrial fibrillation is found, the patient needs to commence oral anticoagulation