On 1st May 2014 a 6 year old male was brought to a remote clinic in the Papua New Guinea Highlands from a very remote village. In the preceding 3 hours he had experienced “more than 6” episodes of copious black diarrhoea tainted with blood and one episode of bloody, dark vomit. He had an 8 hour history of severe constant abdominal pain, worse on the right side, both RIF and R hypochondrium. Prior to this he had been fit and well. He had what is considered a normal diet locally. Rich in sweet potato (kaukau in Pigin), but low in protein. He had been at a tribal pig feast the day before the symptoms started.

If we had an X-ray capability it would have looked like figure 1. 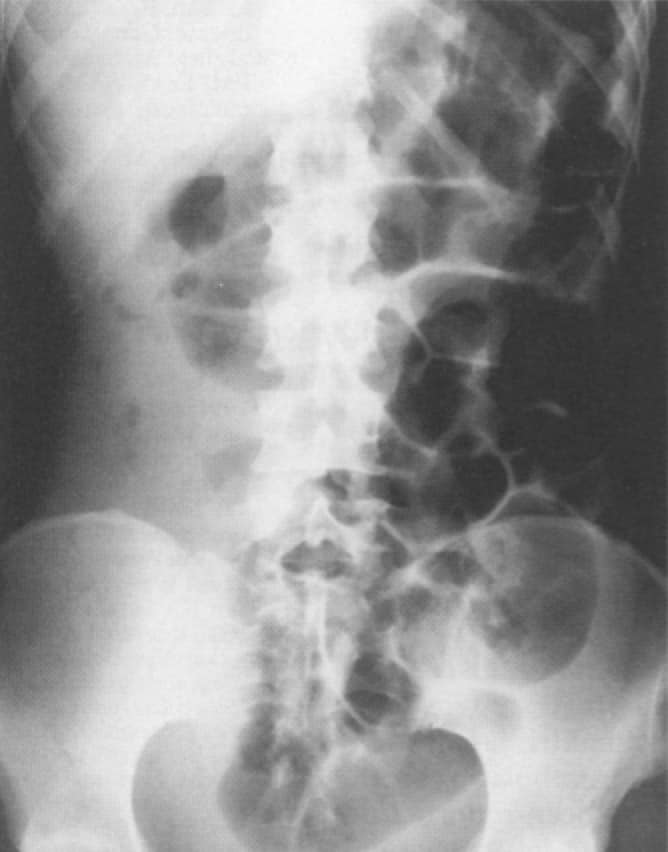 The child was suffering from Clostridial enteritis necrotans, or pigbel as it is known.

Pigbel was first described in PNG in the 1960s as a new disease (1), but was in reality a manifestation of a  disease first noted in Germany and Denmark in the late 1940s and known as “Darmbrand,” meaning ” fire bowels” (2).  Its appearance was limited to the early years after World War II; the highest incidence was in 1948, after which the disease disappeared. The overall mortality was about 40%. Clostridium perfringens type F, later shown to be a heat resistant variant of type C, was isolated from many cases.

Heat stable b toxins of C perfringens type C are found in pig intestines. Poor butchering techniques and incomplete cooking with lack of cold storage, as commonly encountered at pig feasts, contributes a large bacterial and toxin load taken on during feasts. Under normal circumstances the gut trypsin inactivates the b toxin before it can cause damage to the small intestine. Unfortunately populations who are malnourished and subsist on a low protein diet have low trypsin levels. This was thought to be the cause of the post war outbreak in Lubeck, Germany (2). In Papua New Guinea there are 2 other variables that combine with a protein-malnutrition to produce a deadly triad of pigbel; sweet potato is very high in anti-trypsin, further supressing ant endogenous trypsin activity, ascaris worms produce anti-trypsin as part of a defence mechanism when they invade the gut. Given the high prevalence of ascaris infestation (up to 68% in one survey) (3) and a diet that comprises almost entirely of kaukau, the population of the Highlands are very susceptible to pigbel.

Figure 2. Intraoperative photograph of patulous necrosis of the small bowel due to pigbel. (4) 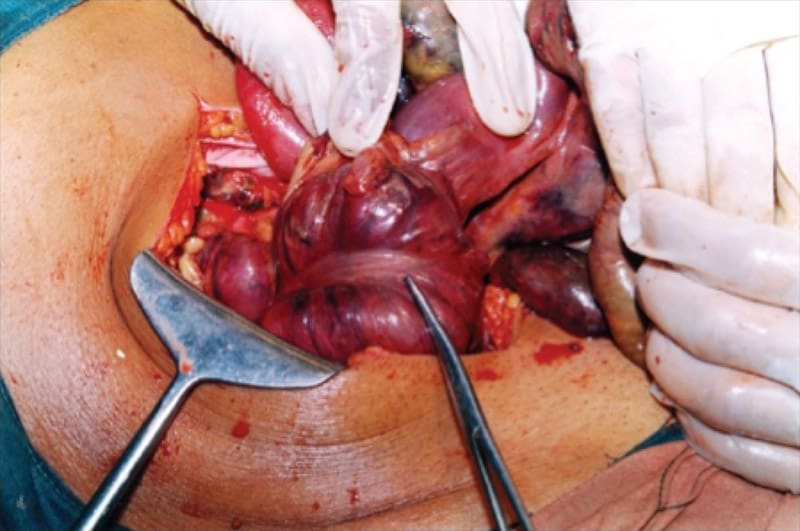 A combination of antibiotics and surgery are the mainstay of treatment of pigbel. Various antimicrobial regimens have been advocated. C perfringens in sensitive to penicillins, all generations of cephalosporins and metronidazole. Our patient was given weight appropriate doses of ceftriaxone and metronidazole and rapidly medivaced to the nearest surgical centre. Sadly he died within 3 hours of presentation.

In the early after the recognition of pigbel the mortality was high, with a combination of antibiotics and early surgery the mortality rate reduced from 60% to 33% (5).

Modification of any of the risk factors above will reduce the chances of a patient suffering from pigbel. In the 1980s a vaccine that targeted the b toxin of C perfringens was developed and widely used in PNG. It virtually eliminated the disease in the vaccinated population (6). Vaccination does not take place any more as far as I know.