Does the ARDSnet protocol increase mortality in COVID-19 patients?

The ARDSnet protocol is a low volume high PEEP protocol used in SARS-like illnesses. COVID-19 is not really behaving in the same way as SARS, in all patients. In some of these patients we see that the lungs are behaving like High Altitude Pulmonary Oedema(HAPE) and anecdotally the use of the ARDSnet protocol has been described as resulting in increased mortality.

This was first described by Dr Gattinoni(1) and later also described by Dr. Kyle-Sidell(2). Again, there are no RCT’s on this, it’s all anecdotal, but it does make some sense. Gattinoni describes some cases where the lungs have “near normal respiratory system compliance”, something not seen in ARDS.

He further describes two phenotypes of the disease. It’s all about COMPLIANCE and ELASTANCE of the lungs. COMPLIANCE(change in volume per unit change in the pressure of the system) is simply, how easily an elastic substance can be stretched. It is inversely proportional to ELASTANCE.

Two phenotypes are described below. They may be distinct entities, or may be part of a continuum. 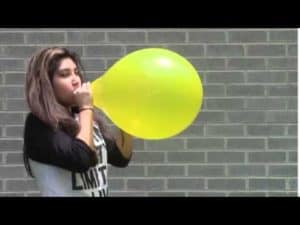 These patients have lungs, where the work of breathing is not increased greatly and allows relatively easy expansion of the lungs. They are still hypoxic.

Think of their lungs as a balloon that is easy to blow up.

These patients have been called the silent hypoxics, sometimes the happy hypoxics. They have the symptoms of COVID-19, with fever, muscle aches and pains and cough and they are significantly hypoxic, with saturations as low as 60- 70%, but their work of breathing is relatively low.

Think of these patients as finding it difficult to take a deep breath.

Their lungs are similar to a balloon that needs a lot of work to blow up.

They are hypoxic with an increased work of breathing and they get tired.

These patients are trying to generate significant negative pressures to inflate their lungs, increase their tidal volumes and get more oxygen to resolve their hypoxia. It is the generation of these large negative pressures that may be causing more damage.

What should the trigger point be for intubation?

Perhaps we should be tolerating lower saturations…….significantly lower saturations, in those that don’t have an increased work of breathing and only be intubating those patients that are tiring, or are developing an abnormal conscious state. That means that we have to flip our thinking around. Normally we intubate before they crash, but perhaps we should be giving them every support and chance to fight the disease and establish good oxygenation and only intervene invasively, when they are working too hard, tiring and not able to achieve this themselves.

Gattinoni states that the best way to differentiate between the two is by CT scan of the chest, however this is not alway practical. He also describes the patients as progressing from or being the H type when their oesophageal pressures, via oesophageal manometry increase and at that point they need intubation. However again, this is not practical in the Emergency Department. There is a surrogate marker that we can use; the patient’s work of breathing.

This patient group has also been described as the Happy Hypoxic. These patients have very low saturations, but do not have a greatly increased work of breathing. They may not have dyspnoea.

Give these patients a HIGH FiO2 to treat hypoxaemia.

Use HFNC or NIV with lower pressures and high oxygen

Early intubation of these patients may result in a transition to the H type. However if they are intubated the following strategy might help: higher volumes 8-9mL/kg and lower PEEP to 8-10cm H2O

Treating those with High Work of Breathing(TYPE H)

These patients have low lung compliance and should be treated according to the ARDSnet protocol, with higher PEEP and proning.

This approach is case based and anecdotal, but it has a lot of people thinking because of what they are seeing in the Emergency Department. These patients don’t make sense. They don’t behave the way they are supposed to. To me this does make sense and I will be using it, mostly to avoid intubation.