Ct or no CT? That is the only question in clearing the cervical spine. 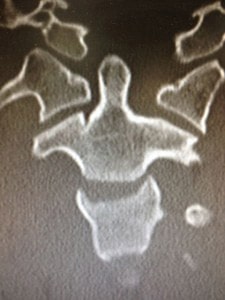 I must admit that my practice has changed in the last few years. I have gone from someone obsessed with minimising CT’s to some that now either clears the cervical spine with say ‘NEXUS’ criteria, or does a scan.

This seems to be more and more the trend, given what we can miss with plain films. I believe that the radiation exposure weighed against the seriousness of a potential fracture, make it a very acceptable investigation.

This week Dr Will Davies joins me on the blog and reviews this question…….. Take it away Will……..

Although radiography has been the standard method for evaluating cervical spine injuries, MDCT scanners allow multiplanar reconstruction of images, leading to increased diagnostic accuracy, according to an article published in the October issue of Medical Physics (October 2009, Vol. 36:10, pp. 4461-4469).

Researchers from the department of medical physics at the University of Crete noted that the traditional imaging approach of choice for cervical spine trauma has been plain radiography (three or five views), followed by CT as an adjunct. However, plain radiographs could potentially be eliminated from the diagnostic workup of C-spine trauma due to the wide availability of MDCT scanners, which offer more rapid and accurate clearance of trauma patients.

But MDCT’s advantages need to be weighed against the modality’s higher radiation burden compared to radiography — especially in the current environment of heightened sensitivity regarding radiation dose. A research team led by Nicholas Theocharopoulos sought to determine if CT’s higher radiation levels — which could result in late radiation effects such as leukemia and solid cancers — are justified compared to other modalities.

As its study cohort, the team created a computer model of 1 million hypothetical patients who received CT scans and radiography exams for cervical spine fractures. The effectiveness of the modalities were calculated for three different groups of patients, classified by risk (low, moderate, and high) as well as four different age groups (20, 40, 60, and 80 years old). Patients were also analyzed based on gender. The groups at risk for cervical spine fracture were incorporated in the decision model on the basis of hypothetical trauma mechanism and clinical findings.

Three imaging policies for working up C-spine trauma were considered: radiography alone, MDCT alone, and a combination of radiography followed by CT as an adjunct for positive findings. The researchers assumed that a positive diagnosis was followed by a surgical or nonsurgical intervention, and postoperative mortality was also accounted for.

To calculate radiation risk from the different approaches, the researchers used entrance surface dose (ESD) measurements. For radiography dose, they measured dose delivered to an anthropomorphic phantom in various positions with a commercially available radiography system (Polydoros 50, Siemens Healthcare, Erlangen, Germany). They found that the typical effective dose from a three-view radiography study of the cervical spine amounts to 0.05 mSv.

For CT dose, they performed an eight-month prospective study of patients already receiving CT scans for C-spine trauma at their institution using a 16-slice scanner (Somatom Sensation 16, Siemens), with a protocol of 120 kVp, pitch of 0.62, and slice reconstruction of 0.75 mm. They found that the radiation burden of a typical CT scan amounts to 3.8 mSv for male patients and 3.4 mSv for females.

The researchers then calculated lifetime attributable risk of mortal cancer from each of the three imaging approaches in the different patient cohorts using probability tables from the Biologic Effects of Ionizing Radiation (BEIR) VII report.

The expense of this CT-based prevention is 15 to 32 additional radiogenic lethal cancer incidents per 1 million patients. This is in addition to any cancers that might be caused by plain radiography or radiography followed by CT for positive findings.

I must admit that my practice has changed in the last few years. I have gone from someone obsessed with minimising CT’s to some that now either clears the cervical spine with say ‘NEXUS’ criteria, or does a scan.

This seems to be more and more the trend, given what we can miss with plain films. I believe that the radiation exposure weighed against the seriousness of a potential fracture, make it a very acceptable investigation.

The group also found that the combined radiography-followed-by-CT approach was only slightly more advantageous than radiography alone, and only for moderate- and high-risk patients.

“For the evaluation of CS trauma, the higher diagnostic accuracy obtained by the CT examination counterbalances the increase in dose compared to plain radiography or radiography followed by CT for positive findings and renders CT utilization dose effective and justified regardless of the patient age, sex, and fracture risk,” the authors concluded.