In this blog we discuss the various complications of Bariatric Surgery.

Bariatric surgery is one of the fastest growing areas of surgery. As with all surgical procedures, there is the possibility of postoperative complications. Emergency physicians should be familiar with the common problems encountered, limitations of conventional investigations, and the management of these complications, which are usually emergencies.

28 year old male presented with a 2 hour history of sudden onset of severe, cramping central abdominal pain. The pain was associated with several episodes of vomiting. Of note, the patient had had multiple presentations with abdominal pain to several local emergency departments and reported one previous episode of small bowel obstruction, treated non-operatively approximately a year before. The other episodes had resolved with analgesia and all investigations- predominantly plain abdominal x rays were reportedly normal. The patient also reported regular cannabis use.

On further history the patient stated that he had weight loss surgery 6 years previously. Discussion with his partner clarified that this was a Roux-en-Y gastric bypass.

Examination revealed a very slim gentleman in some distress. He was afebrile, normotensive and tachycardic. His abdominal examination was difficult to appreciate, because of his discomfort.

After initial analgesia, his pain decreased somewhat and a further discussion revealed that he had been told to present to ED when the pain recurred, due to the risk of “twisting of his bowel”. By this time an examination of his abdomen had been achieved and it was found to be soft, generally tender, with no masses.

The diagnosis was unclear, but having been at EMCore Melbourne and listened to Ryan Windish discussing “Bariatric Bombshells” I had a low threshold for axial imaging and also awareness of the shortcomings of the modality in this group. Prior to embarking on a contrast abdominal CT in this young man a VBG was obtained to assess his renal function. We were concerned to discover that his lactate was 8 on the gas!

As he was taken urgently to scan, I contacted the on call surgeon and attempted to contact his private bariatric surgeon.

His scans are shown below: 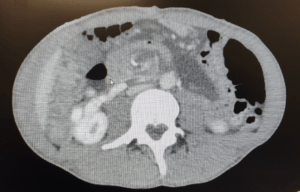 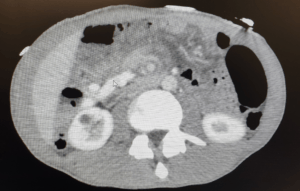 The Scan is obviously hard to appreciate, due to the absence of any fat planes due to the success of the weight loss surgery. However one can just appreciate a swirl within the mesentery of the midgut. There are no features of obstruction that I could see.

Fortunately the surgeon on call was experienced in the complications of bariatric surgery and took the gentleman to theatre urgently. Laparoscopy identified a section of ileum that was twisted through a defect between the alimentary (Roux) limb mesentery and the transverse mesocolon (the Petersen’s defect) and it was ischaemic. This was successfully untwisted and reperfused well.

He had an uneventful recovery and was discharged for follow up with his bariatric surgeon.

The presentation here, was typical of a late complication of bariatric surgery, a nonspecific but concerning presentation with equivocal imaging. The time critical nature of the complication was also apparent as this patient underwent definitive surgical management within 3 hrs of onset of pain, but further delay could have had an untoward outcome.

Patients who have had bariatric operations develop gallstones at a higher incidence than the average population.(1) This is thought to be due to alterations in enterohepatic circulation, hormonal changes associated with rapid weight loss, and perhaps increased biliary stasis. RYGB results in food travelling through the alimentary limb and delay the release of the usual gut hormones that stimulate gallbladder contraction, resulting in atypical symptoms or non-postprandial pain.

Just under 5% of patients develop ulceration of the anastamotic margin at the gastrojejunal anastomosis which presents as epigastric burning pain, upper GI bleeding or even acute ulcerative perforation.(2) Perforation occurs in around 1% of patients and presents similarly to other perforated viscus with similar risk factors.

RYGB patients may develop small bowel obstructions related to internal hernias or postoperative adhesions. Classic presentation is with diffuse abdominal pain, distension, bloating, nausea, and vomiting; all of which were seen in this case with the exception of the distension. In patients who have had a prior laparoscopic gastric bypass, over 50% of small bowel obstructions are caused by internal hernias.(3)

These internal hernias are the most difficult to identify, but are a potentially catastrophic late complication in post-RYGB patients, when they cause a small bowel volvulus, as in this case. Symptoms may be non-specific and intermittent. Axial imaging may be read as negative or normal in about 30% of patients.(4) Vital signs and laboratory values may be relatively normal unless, as in this case, the bowel blood supply is compromised.

The overall incidence of internal hernias after RYGB is 2.5%, with the majority (87%) of hernias occurring at either the transverse mesocolic defect or Petersen’s defect.(3)

The sites of herniation can be seen below in an illustration from Lim, Ret al. Early and late complications of bariatric operation. Trauma Surgery & Acute Care. 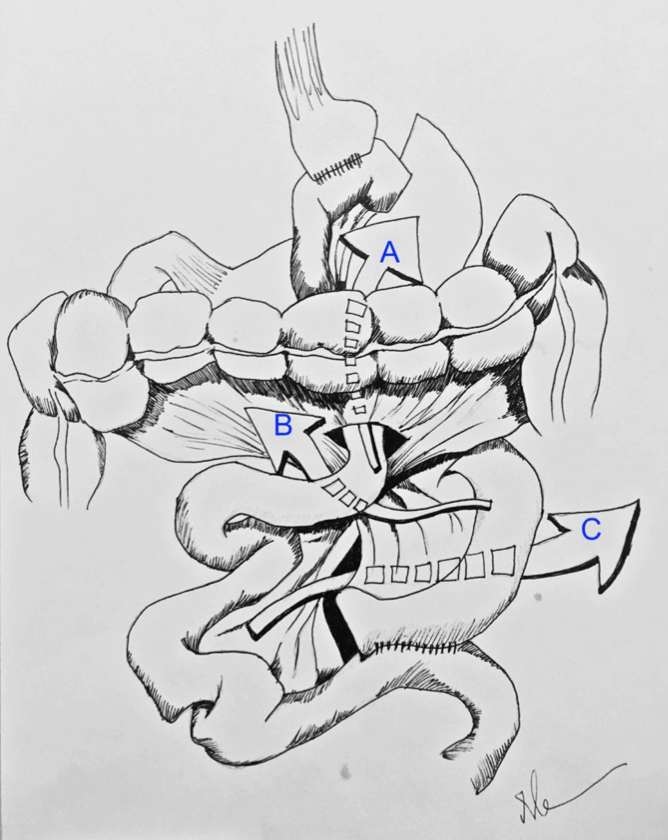 As emergency physicians, we need to be aware of the complications of weight loss surgery. The presentation at EMCore Melbourne covered all 3 common bariatric procedures and both early and late presentations. Here I have only been able to discuss the late complications of Roux-en-Y bypass surgery. There is a more comprehensive review available in the video below from RESUS TV.